2018 Parliament of the World’s Religions Report 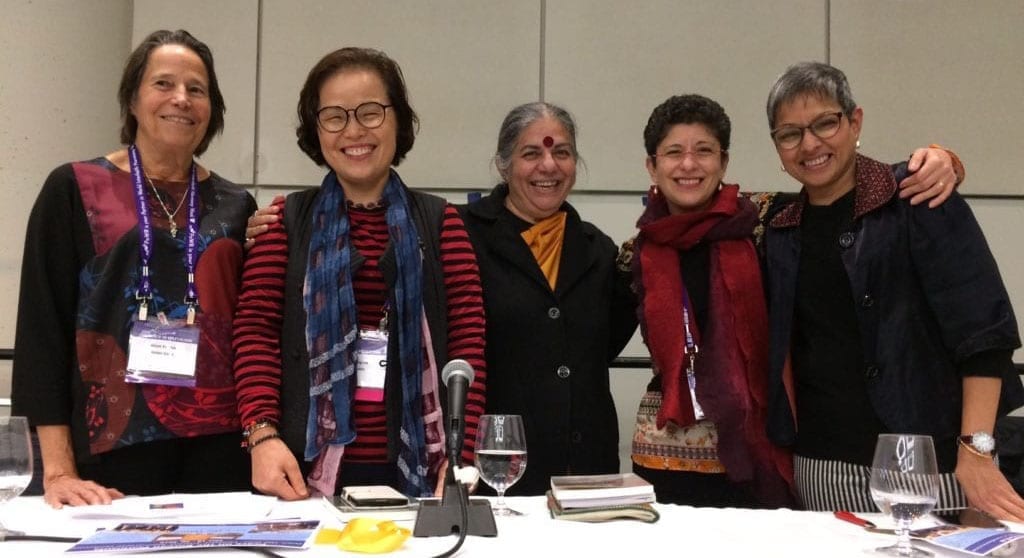 The Temple of Understanding greatly enjoyed connecting with colleagues and friends at this year’s Parliament of the World’s Religions in Toronto, Ontario. We are especially proud to have worked with environmental activist and food sovereignty advocate Dr. Vandana Shiva at her second Parliament. Dr. Shiva’s new book is entitled Oneness Versus the 0%: Shattering Illusions, Seeing Freedom (check it out via Spinifex Press).

Dr. Shiva first spoke at a Temple of Understanding event at the 2012 UN Rio Conference, and the TOU helped seed her work by bringing her to the Parliament for the first time in 2015. At the Toronto Parliament this year, she came as a major speaker in the Climate Change plenary. Dr. Shiva appeared on multiple panels and was increasingly warmly received, so that at her last session she spoke to a packed room. Her decades of advocacy and her passion for seed freedom and environmental justice helped Parliament participants move forward in their understanding of climate issues.

Highlights from the 2018 Parliament

Our colleague Joyce Dubensky of Tanenbaum has provided reflections on the Parliament of World Religions that include the full text of the plenary speech of Dr. P.L. de Silva, Director of the Institute for Strategic Studies and Democracy (ISSD). His talk entitled “Cultivation of Hatred” was offered as part of the Countering War, Hate, and Violence Assembly. Dr. de Silva writes of “Pope Francis’ condemnation of the sowing of hatred” and asks, “Aren’t those who cultivate hate culpable?” He suggests “the leading armaments countries… be condemned as war profiteers” and concludes that “reconciliation, faith and ethical leadership is what is most URGENTLY needed.”

The Parliament of the World’s Religions has posted short highlights of the Parliament as well as 13 full live streamed videos of major plenaries on their Facebook page.

When the Parliament of the World’s Religions was launched in 1993, Juliet Hollister was invited to represent the Temple of Understanding as founder of the organization. Incorporated in 1960 and having been active at that time for over thirty years, the TOU participated in the Parliament as one of the oldest American organizations in the international interfaith movement.

Juliet brought a delegation of her board and staff to the 1993 gathering and walked in the opening procession of leaders of the interfaith movement. Rather than seeking special recognition for the TOU’s early contributions to the interfaith movement in the United States, Juliet’s position was as a kind of “Johnny Appleseed” of interfaith. Since, as she maintained, the job was “too big for any one organization,” she saw organizations like the TOU and Parliament as collaborating to spread seeds of dialogue, peace, and justice throughout the world.[/vc_column_text][vc_row_inner attached=”true” is_fullwidth_content=”false”][vc_column_inner width=”2/3″][vc_column_text css=”.vc_custom_1596656506530{margin-bottom: 0px !important;padding-right: 20px !important;}”]At the 1999 Parliament in Cape Town, South Africa, the TOU organized a wide variety of programs and honored Nelson Mandela with a Hollister Award. By the time of the third modern Parliament gathering in 2004 in Barcelona, Spain, the TOU had launched an educational cooperative with eleven interfaith organizations called the Consultation for Interfaith Education (CIE). CIE sponsored a three-day symposium at the Parliament and featured Ela Gandhi, Mahatma Gandhi’s granddaughter and now a Hollister award recipient, as a speaker. Hollister Awards were presented to Dr. Hans Kung for his work on Towards a Global Ethic (a document articulating the ethical commitments held in common by the world’s religious traditions) and to Pir Vilayat Inayat Khan for his leadership in the interfaith movement representing Sufism. The event was capped by two stunning performances by the Taiko drummers.[/vc_column_text][/vc_column_inner][vc_column_inner width=”1/3″ css=”.vc_custom_1553267918518{padding-left: 20px !important;}”][vc_single_image image=”10994″ img_size=”medium” add_caption=”yes” style=”vc_box_rounded” onclick=”link_image”][/vc_column_inner][/vc_row_inner][vc_column_text css=”.vc_custom_1553265287249{margin-bottom: 0px !important;}”]In Melbourne, Australia in 2009, the TOU again collaborated as part of the CIE on a one-day experiential process including a group mosaic art project and the sharing of Indigenous perspectives by Chief Oren Lyons and Chief Jake Swamp. The program ended with a workshop from a group of Indigenous Maori elders, who taught the use of animal postures in dance as a form of nonverbal communication. The day ended with an open invitation to all to view the finished mosaic project and experience a group dance circle.[/vc_column_text][vc_single_image image=”10997″ img_size=”full” add_caption=”yes” style=”vc_box_rounded” onclick=”link_image”][vc_column_text css=”.vc_custom_1553266539628{margin-bottom: 0px !important;}”]In Salt Lake City, Utah in 2015, the Temple of Understanding brought environmentalist and food sovereignty advocate Dr. Vandana Shiva to the Parliament, where many religious leaders were exposed to her work for the first time. The TOU also connected its work at the United Nations with its long-standing goals of interfaith education by presenting a panel on “Faith at the United Nations” that focused on the Sustainable Development Goals. Vandana Shiva joined our own UN representative Grove Harris and ecofeminist theologian Starhawk for a panel on community resilience around food and water justice.

In Toronto, Ontario in 2018, the TOU contributed panels on topics including ecojustice, climate change, and women’s leadership in interfaith, and we hosted Dr. Vandana Shiva at three of those panels. We were also pleased that our film Roots of Change: Food Sovereignty, Women, and Eco-Justice was accepted for presentation in the Parliament’s film category.[/vc_column_text][vc_row_inner attached=”true” is_fullwidth_content=”false”][vc_column_inner width=”2/3″][vc_column_text css=”.vc_custom_1553268098721{margin-bottom: 0px !important;padding-right: 20px !important;}”]

TOU at the 2018 Parliament in Toronto, Ontario

We started our interfaith work in Toronto a day before the Parliament by attending the Unity Earth Toronto Convergence, where our colleague A.K. Merchant from the Temple of Understanding–India spoke. This convening laid groundwork for mutual understanding and future events around the globe.

Our first Parliament panel “Religion and the Work of the United Nations” included brilliant colleagues from our UN work, including Azza Karam, Denise Scotto, Levi Bautista, Lopa Banerjee and Bruce Knotts (not pictured).[/vc_column_text][/vc_column_inner][vc_column_inner width=”1/3″][vc_single_image image=”11006″ img_size=”medium” add_caption=”yes” style=”vc_box_rounded” onclick=”link_image”][/vc_column_inner][/vc_row_inner][vc_single_image image=”10996″ img_size=”full” add_caption=”yes” style=”vc_box_rounded” onclick=”link_image”][vc_row_inner attached=”true” is_fullwidth_content=”false”][vc_column_inner width=”2/3″][vc_column_text css=”.vc_custom_1553268125601{margin-bottom: 0px !important;padding-right: 20px !important;}”]We were proud to support our youth representative 2018 TOU summer intern Larkin Cleland as he spoke on “Forging Alternatives to the Culture of Consumerism and Violence.” This session was sponsored by the India chapter of the Temple of Understanding and the text of Larkin’s presentation can be found here.

As part of the innovative Women’s Mentorship program, Lopa Banerjee spoke to a full room of younger attendees, which provided a more intimate setting for interaction.

Banerjee said that human rights underpin harmony and prosperity, and now in a new world order, national interests are seen as if they are in opposition to global interests. Movements of faith can extend to political acts. The UN SDGs are defending human rights and morality, with social justice at the center. We can reclaim faith’s moral core and the UN’s moral core.[/vc_column_text][/vc_column_inner][vc_column_inner width=”1/3″][vc_single_image image=”10993″ img_size=”medium” add_caption=”yes” style=”vc_box_rounded” onclick=”link_image”][/vc_column_inner][/vc_row_inner][vc_single_image image=”11000″ img_size=”full” add_caption=”yes” style=”vc_box_rounded” onclick=”link_image”][vc_column_text css=”.vc_custom_1553264618896{margin-bottom: 0px !important;}”]We decorated the panel on cracking the “stained glass ceiling” that women face in interfaith leadership with color and focused on gratitude for those who have taught us and gone before in the work. The panel addressed obstacles, but focused more on kinship among women, including sharing diverse perspectives.[/vc_column_text][vc_single_image image=”11011″ img_size=”full” add_caption=”yes” style=”vc_box_rounded” onclick=”link_image”][vc_column_text css=”.vc_custom_1553264249048{margin-bottom: 0px !important;}”]On our panel on women of faith speaking out, Dr. Shiva spoke of the immense concentration of wealth from large corporate mergers, so that approximately five men own most of the world’s agro-chemical industry. We must find courageous compassion and pursue caring for the earth as the highest religion; protection with love is a duty.[/vc_column_text][vc_single_image image=”10998″ img_size=”full” add_caption=”yes” style=”vc_box_rounded” onclick=”link_image”][vc_row_inner attached=”true” is_fullwidth_content=”false”][vc_column_inner width=”2/3″][vc_column_text css=”.vc_custom_1553268197039{margin-bottom: 0px !important;padding-right: 20px !important;}”]Chris Peters spoke as part of Dr. Shiva’s panel on Earth Democracy. As part of the Seventh Generation Fund for Indigenous Peoples, he presented a powerful “Platform for Action: To Do More Than Survive, Thrive.”[/vc_column_text][/vc_column_inner][vc_column_inner width=”1/3″][vc_single_image image=”10985″ img_size=”medium” add_caption=”yes” style=”vc_box_rounded” onclick=”custom_link” img_link_target=”_blank” link=”https://templeofunderstanding.org/wp-content/uploads/2019/03/7th-generation-platform-for-action.pdf”][/vc_column_inner][/vc_row_inner][vc_column_text css=”.vc_custom_1553264170755{margin-bottom: 0px !important;}”]Speaker Hugh Locke joined us for Dr. Shiva’s panel on seed freedom. He is co-founder of the Smallholder Farmers Alliance, doing innovative social justice work around “tree currency“.

Speaker Grove Harris opened and closed the session on “Interfaith Engagement: Past, Present and Future.”