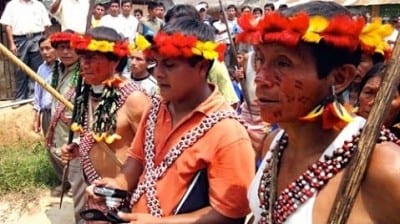 This article is reprinted with permission of author John Vibes and TrueActivist.com under a Creative Commons license.

Global Corporate Oil has spilled in the Amazon… and an Amazonian tribe in Peru has decided to speak loudly with action.  The tribe held at least eight public officials in response to their tribal land, food, and water ways being polluted.  All over the world, corporate greed is seeking ways to suck out the oil and minerals from below the earth’s crust. The corporations are legally classified as an “individual” and given the same rights as a person.  But, a corporation is not human… and holds nor morals.

Being closer to the natural world where the stupid legal logic of corporate individualism doesn’t exist, tribal leaders in the amazon are seeking to bring a spotlight to the total destruction being done by the greedy capitalists and their corporation’s unmoral actions against the people and the planet.

An Amazonian tribe in Peru took at least eight public officials hostage this week, in response to an oil spill that polluted their lands.

According to Reuters, it was the Wampis community of Mayuriaga which staged the protest and actually seized a military helicopter, capturing multiple crew members along with other government officials. The hostages include three oil company executives, four government regulatory officials and a specialist with the energy and mines ministry.

The Peruvian Air Force said in a press release after the incident that the hostages “were being treated adequately and are in perfect shape, as is the helicopter.”

Among many demands, the Tribe insisted that they were left out of a clean-up plan that was associated with the spill.

Over a month ago, in Mayuriaga, Peru, multiple oil pipelines ruptured and spilled over 3,000 barrels of oil into the wilderness. As with most oil spills, both the government and the corporation responsible have been slow to clean up the mess.

However, many Amazonian tribes are forced to live in the mess, and have had their homes and their sources of food and water destroyed. This is just the most recent environmental tragedy in a long line of preventable, man-made disasters that have been created on tribal property, which neither the governments or corporations should have any claim to.

Petroperu, the company responsible for the pipeline, was ordered to replace parts on the pipeline after similar leaks occurred in the past, but they never got around to fixing the problem. Petroperu is currently under investigation for the spill, and they face up to $17 million in fines.

After a standoff lasting over a day, the tribal occupiers struck a deal with local authorities to release the hostages.

Reuters reported that Petroperu struck a deal with chiefs of the tribe that includes bringing electrical and telephone coverage to the community and helping develop local businesses.

It is easy to sympathize with these tribes who have had their land and resources not only stolen, but polluted by a government that they never chose, and the corporations that are in bed with that government.

This article (Amazonian Tribe Seizes Military Helicopter And Takes Government Officials Hostage After Oil Spill) is free and open source. You have permission to republish this article under a Creative Commons license with attribution to the author and TrueActivist.com.