American Indian Law Alliance: Indigenous Voices Must Not Be Excluded from UN 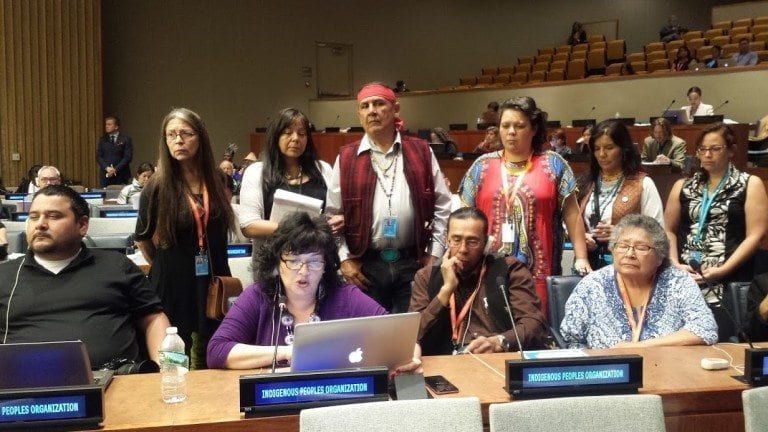 [This statement is reprinted from the AILA newsletter.]

Statement read aloud on May 11, 2016 at the
‘consultations with the advisers appointed by the President of the General Assembly to assist him in conducting consultations to enable the participation of indigenous peoples at the United Nations’
During the 15th Session of the UN Permanent Forum on the Rights of Indigenous Peoples,
taking place from 9-20 May, 2016 at UN Headquarters
Presented by Gaen hia uh / Betty Lyons (Onondaga Nation, Snipe Clan)
President of the American Indian Law Alliance

My original name is Gaen hia uh, my colonized name is Betty Lyons and I am a proud citizen of the Onondaga Nation and President of the American Indian Law Alliance. I acknowledge and am proud to have my leadership here from the Haudenosaunee Confederacy.

We are deeply concerned regarding the changes that are being proposed under the draft compilation of views on “enabling the participation of indigenous peoples representatives and institutions in relevant United Nations meetings on issues affecting them and of good practices within the UN.” In particular page five, Section E, titled “Body to Oversee Accreditation.” The mere suggestion of this draft that eligibility and identification should be determined by member states, indigenous peoples and organizations is in direct violation of the right to self-determination as provided for under article 3 of the United Nations Declaration on the Rights of Indigenous Peoples. That we as indigenous peoples are to sit along side member states to determine who is and who isn’t indigenous is the same divide and conquer mentality and systems we have been fighting since contact.

We are peoples equal to all other peoples and as such, have the right to be heard in the international fora.

The suggestion of this draft by Member States that only a select few be allowed to voice concerns regarding human rights violations is unacceptable. The UNPFII was created by Indigenous Peoples for the purpose to voice our opposition to egregious human rights violations. Not allowing our participation is in direct violation of the UNDRIP Articles 1, 2 and 3. We note these proposed changes are exactly in line with statements from a number of Member States; as they look to impose greater restrictions of who can speak and who can attend the UNPFII.

This new proposed compilation paper suggests that it will determine and not allow certain Indigenous Peoples a voice at the United Nations is the continual practice of the mindset of the Doctrine of Discovery and the practice of ‘rights ritualism.’ More importantly, it creates an oppressive and pejorative atmosphere.

We continue to assert, the Doctrine of Discovery’s continual impact continues today and the policies and practices of many Member States are evident in their statements and actions.

We remind the United Nations and Permanent Forum that Indigenous Peoples traveled to meet prior to the opening of the UNPFII, as we have done since the inception of the UNPFII. Our Indigenous Brothers and Sisters make this trip with limited resources and at great hardship in leaving our families, our lands and our communities for some at great peril to the lives of themselves and the families they leave back home to gather together with other members of our caucuses to prepare thoughtful interventions.

We recommend that this draft and any plans from Member States, the United Nations system as a whole and United Nations departments have in furthering this “Body to Oversee Accreditation” is in fact a human rights violation and should be immediately be removed from any further discussions as our right to self-determination is not negotiable.