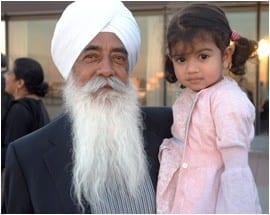 Bhai Sahib Dr. Mohinder Singh Ahluwalia is the third in succession of spiritual leaders of the Guru Nanak Nishkam Sewak Jatha GNNSJ (http://www.gnnsjleeds.com/) in Birmingham, UK. He has been Chairman since 1973. As one of the largest registered Sikh charities in the UK, he is engaged in an astounding range of initiatives aimed at meeting his mission of serving humanity and creation.  With a farsighted vision, Bhai Sahib embraces the concept of education deeply rooted in one’s own tradition while fostering interfaith understanding as an essential tool for forging sustainable world peace.  His work as an intra- and interfaith leader in his community and in the larger interfaith movement has brought him increasing recognition.

Bhai Sahib has extensive experience in the multi-disciplinary fields of Civil and Structural Engineering, Housing, Roads, Water Supply, Sanitation and Conservation. He grew up in Kenya and served the Zambian Government in the National Housing Authority and as a consultant to various UNHCS (HABITAT) projects. In 1972 he formed a voluntary service group to build the first Gurudwara (Sikh place of worship) in Zambia’s capital, Lusaka. In recent years, Bhai Sahib has traveled to the UN to promote interfaith understanding at meetings of the Tripartite Forum for Interfaith Dialogue and Cooperation for Peace.