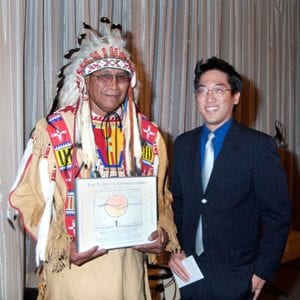 Chief Arvol Looking Horse, born on the Cheyenne River Reservation in South Dakota, is the 19th generation Keeper of the White Buffalo Calf Pipe, a tremendous responsibility bestowed upon him at age 12. He is the spiritual leader among the Lakota, Dakota and Nakota People. His life has revolved around his commitment to work towards religious freedom, cultural survival and revival.

Following the birth of the White Buffalo in 1994, a prophetic event for the Lakota, Dakota, and Nakota peoples, Chief Looking Horse was directed to honor the Four Directions with a series of ceremonies at sacred sites to join people together in prayers and to share the message of his tradition with others who are also concerned about peace and the destruction of the Earth. These ceremonies took place on June 21st, the Summer Solstice, and thus began World Peace and Prayer Day.

Chief Looking Horse holds an honorary doctorate from the University of South Dakota. He has been the recipient of several awards, including the Wolf Award of Canada for his dedicated work for peace. He travels and speaks extensively on peace, environmental and native rights issues. He has met with other religious leaders including, Desmond Tutu and His Holiness the Dalai Lama during his travels. Recently, he has re-committed his message of peace by taking the World Peace and Prayer Day ceremony around the world, beginning in 2001 in Ireland, followed by South Africa (2002), to Australia (2003), then to Japan (2004).  His dedication to spread peace is based on his commitment to “work for change and let the world know how beautiful our way of life is.”