CSW63 Report: 2019 Commission on the Status of Women 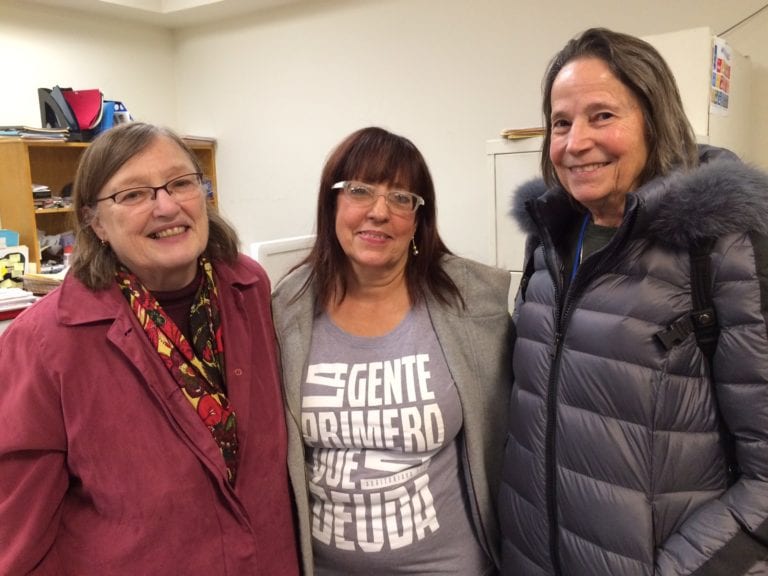 The Temple of Understanding’s events at CSW63 were well-attended and brought a heart-centered attention to the work.

The singing of Kristin Hoffman lifted spirits and encouraged our speakers to move right to the core. The synergies between speakers Eileen Llorens, calling for a debt audit and justice for the people of Puerto Rico, and Katherine Power, calling for personal practices of peace that inform action, fed the audience. We were gratified by the number of young people present and respect the voice of one participant who called out those who want to simply turn over the world’s problems to the younger generation. We all have to stand and own our parts and work for change.

For inspiration, check out Imagine a Puerto Rican Recovery Designed by Puerto Ricans. There is also current New York Times reporting on unequal treatment and the reconstruction challenges still facing Puerto Rico, which include hunger, lack of medical care, and damaged bridges and other infrastructure:

“Puerto Rico was in financial distress and had crumbling infrastructure before Hurricane Maria, and many residents complain of government malfeasance that exacerbated the storm’s impact, echoing criticism from Washington. But Puerto Rican leaders say the delay to the Vieques hospital and thousands of other stalled projects is a reflection of unequal treatment from the White House and Congress, which last week failed to pass disaster relief legislation because of a dispute over how much money to send the island.”

The Fifth Annual Interfaith Service of Gratitude and Remembrance

The service of remembrance was a sorely needed time for the community to come together in spirit. We at the Church Center lost many colleagues in the tragic airline crash in Ethiopia, and while our work and the CSW can be hectic, ultimate concerns call us to stop and pay attention to the losses in our midst. We also heed the practice of gratitude, which co-exists with grief. Music and prayerful remembrances of individuals who have passed on, recollection of our connections to the Earth, and honoring of all of our mothers, helped us join together for an hour of peace.

Conversations on Social Cohesion: Stories of Women, Faith, and Leadership

It was an honor to join this group of women in speaking from the heart.

TOU Executive Director Alison Van Dyk commented, “It was heartwarming to hear women in leadership positions being so forthright about their experiences of being ignored, put down or belittled by unwanted advances. As someone in a leadership position I agree that we can no longer accept this behavior as the norm. We must speak out more forcefully about our right to be acknowledged and call out all unacceptable behavior towards women worldwide.”

Our colleague Jillian Abballe from the Anglican Communion posted on Facebook afterwards, “This doesn’t feel like an event. This feels like a witness to the stories of amazing, powerful faith-full women, that I am so grateful to work with, to walk this path with, to dream with, to shake things up with. I feel healed by this conversation.”

Together, we can end “business as usual” and pursue transformation.

More details on the speakers at these sessions is available here.

The TOU attended many more sessions during the CSW for solidarity, inspiration, education, and collaboration. Resources and links are in this complementary blog post. We offered support to those civil society members advocating during the proceedings inside the UN.

Our colleagues at WILPF, the Women’s International League for Peace and Freedom, reported on outcomes of the CSW in detail, explaining that:

The Agreed Conclusions represent a step forward in identifying and removing barriers to women’s and girls’ access to public services. The Conclusions contain notably stronger language on the need for increased investment in social protection, public services and sustainable infrastructure to support the productivity of women’s work, including in the informal economy.

Though discussions varied widely, the civil society movement and Member States joined together in their call for:

Member States highlighted concrete initiatives as clear and concise frameworks for the implementation of an integrated approach to economic and social development at both national and international levels. Examples of these initiatives include: the National Social Protection Policy in Zambia, the Social Cohesion Fund in Morocco, feminist international agendas, like France’s Feminist Foreign Policy and the 100% ODA Plan of the UAE.

And of course there is much more on Twitter:

#CSW63 WRAP-UP: SOCIAL PROTECTION AS KEY TO #MOVETHEMONEY FROM WAR TO GENDER EQUALITY AND PEACE