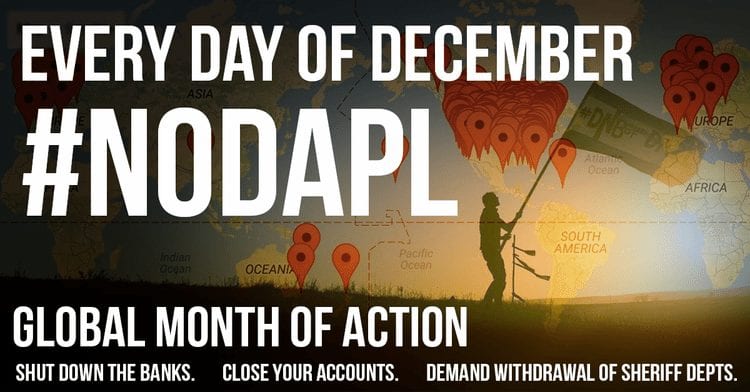 On December 4, the department of the Army announced that it will not approve an easement that will allow the proposed Dakota Access Pipeline to cross under Lake Oahe. The following statement was released by Standing Rock Sioux Tribal Chairman Dave Archambault II.

“Today, the U.S. Army Corps of Engineers announced that it will not be granting the easement to cross Lake Oahe for the proposed Dakota Access Pipeline. Instead, the Corps will be undertaking an environmental impact statement to look at possible alternative routes…”

Read the complete statement at StandWithStandingRock.net >>

But the fight is not over! So long as the project is still being funded, it may move forward at a later date. Please take action to cut off the Dakota Pipeline’s funding.

“While the US Army Corps continues its consultation with the Standing Rock Sioux Tribe about the river crossing, the Dakota Access pipeline project is in financial jeopardy.  It is likely impossible for the company to meet its January 1 deadline, and if it does not, producers and shippers who two years ago committed to use the pipeline will have the option to renegotiate or even terminate their contracts… In August, a group of banks agreed to lend $2.5 billion to Dakota Access. But $1.4 billion of this loan is still on hold until the Army Corps grants the final permits for the pipeline. This means that there is still time for the banks involved in this loan to cut their line of credit.”

Target the 17 banks funding the pipeline and demand they divest from the project — read more on HonorEarth.org >>

You can also join MoveOn.org in thanking the Standing Rock Sioux community and/or contributing financially to the tribe.