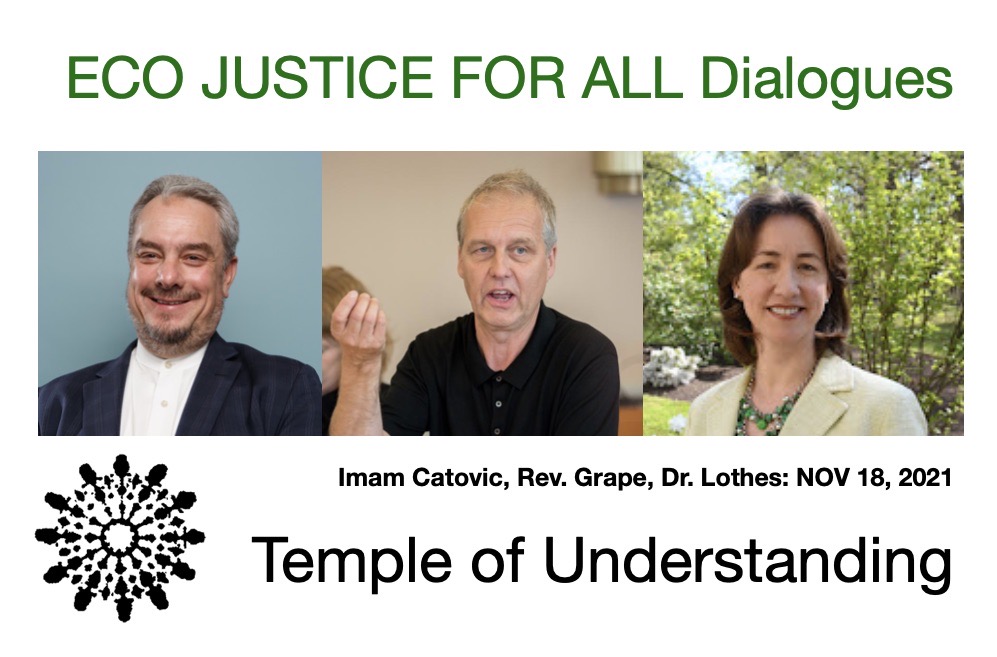 Temple of Understanding ECO JUSTICE FOR ALL Dialogue series presents

Imam Saffet Abid Catovic has been a long-time US Muslim Community Organizer/Activist and Environmental Leader. He is a core member of the Parliament of the World’s Religions Climate Action Task Force and serves on their Board of Trustees as Treasurer. He is also a member of the Statewide Clergy Council of Faith in New Jersey, a Faith in Action affiliate, and also serves on their Board of Directors. Saffet is a GreenFaith Muslim Fellow and serves as their Senior Muslim advisor. He is: the Co-founder and Chair of the Green Muslims of New Jersey (GMNJ); a founding board member of the Islamic Society of North America’s (ISNA) Green Initiatives; and has been recently appointed to head ISNA’s Office for Inter-faith and Community Alliances (IOICA) in Washington DC.  Saffet was a consultant to the Drafting Committee of the Islamic Declaration on Global Climate Change (2015); a founding member of the Global Muslim Climate Network (GMCN); a Co-drafter of the Fiqh Council of North America (FCNA) “Fatwa” Religious ruling on fossil fuel divestment and currently a member of the scholars Drafting team of “Al-Mizan – Covenant for the Earth” organized under the auspices of the United Nations Environmental Program (UNEP) – Faiths for Earth and the Islamic World Educational, Scientific and Cultural Organization (ICESCO) .  Saffet has been recently appointed to the Muslim Alliance in North America (MANA)  Executive Board. Imam Saffet Abid Catovic serves as the Muslim Chaplain at Drew University where he also received his MA in Religion and Society, specializing in Religion and the Environment and is currently working on his Doctorate of Ministry.

Rev. Henrik Grape is senior advisor on Care for Creation, Sustainability, and Climate Justice for the World Council of Churches (WCC). In this article, “Can we end our societal addiction to fossil fuels?” Rev. Henrik Grape reflects on the recently released report from the UN’s Intergovernmental Panel on Climate Change. Grape is a member of the WCC delegation that will attend the UN climate talks (COP26) in Glasgow. Link to article. Rev. Henrik Grape. Photo: Albin Hillert/WCC

Dr. Erin Lothes is a theologian at Saint Elizabeth University, Morristown, NJ., a researcher in the field of energy ethics, and a scholar of the faith-based environmental movement.  Currently on leave, Erin is now Sr. Manager, Laudato Si’ Animators Program with the Laudato Si’ Movement (formerly the Global Catholic Climate Movement). Dr. Lothes is author of Inspired Sustainability: Planting Seeds for Action (Orbis 2016) and The Paradox of Christian Sacrifice: The Loss of Self, the Gift of Self (Herder and Herder, 2007).  She is lead author of the co-authored“Catholic Moral Traditions and Energy Ethics for the Twenty-First Century,” Journal of Moral Theology  and author of other energy ethics essays and articles on faith-based environmentalism. She is a graduate of Fordham University, Boston College, and  Princeton University, and served as an Earth Institute Fellow at Columbia University.