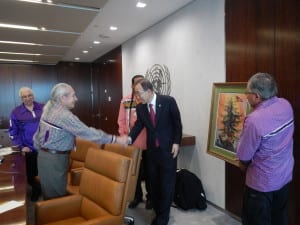 The Haudenosaunee are taking their fight to restore Onondaga Lake – and by extension all Indigenous lands and waters contaminated and polluted by UN Member States – to the United Nations, calling on the UN Permanent Forum on Indigenous Issues to raise their voices in support of restoring Mother Earth.

The seven-member Haudenosaunee delegation, led by Tadodaho (Chief) Sidney Hill of the Onondaga Nation, presented the Secretary General with an engraved plaque featuring the Tree of Peace and the flag of the Confederacy, which is comprised of the Mohawk, Oneida, Onondaga, Cayuga, Seneca and Tuscarora Nations, as well as a painting of the Tree of Peace by Onondaga Nation Faithkeeper Oren Lyons.

“We are honored to be received by the Secretary General in the hopes that we can continue to further diplomatic relations within the UN system and among UN agencies,” said Tadodaho Hill.

Click the image for a video of the Haudenosaunee Delegation: 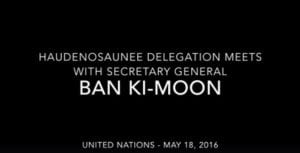