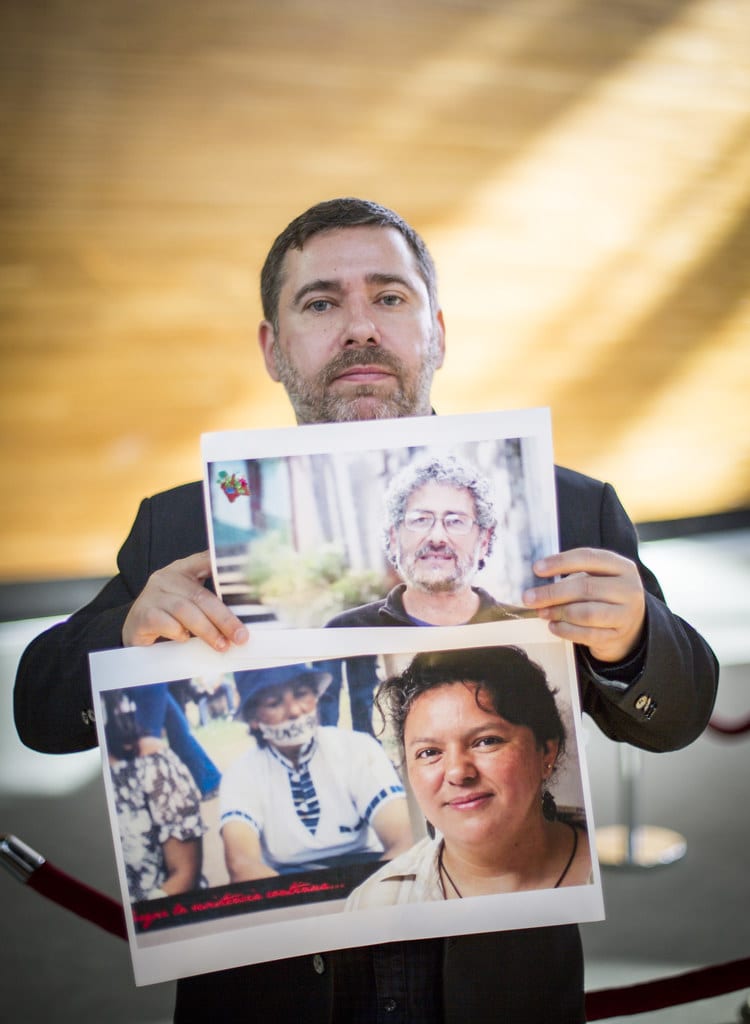 [This letter is reprinted with permission from WED, the Women’s Environment & Development Organization.]

As many of you are aware, on March 3, 2016, Berta Cáceres, feminist & indigenous woman human rights defender (WHRD), was brutally murdered while sleeping in her home in Intibucá. She co-founded and directed the Consejo Cívico de Organizaciones Populares e Indígenas de Honduras (COPINH), which was resisting the construction of DESA’s AguaZarca hydroelectric dam. On March 15, Nelson García, another COPINH member, was gunned down in his home in Honduras.

Just over a week ago, on March 17, WEDO joined hundreds of women’s rights groups, activists and allies, and Berta’s family — utilizing the moment of the 60th Commission on the Status of Women– to demand justice for her murder. Protests included demands for the protection and security for her family and COPINH members and the immediate halt to plans for the Agua Zarca Hydroelectric dam in Rio Blanco, Honduras by rallying in front of the Honduran Mission to the UN in New York. Berta’s death highlights the desperate need to end impunity for threats and attacks against all human rights defenders and enact laws for their protection.

Bertha Isabel Zuniga Cáceres, the daughter of slain activist Berta Cáceres, called on the government of Honduras to identify the culprit “not just for the assassination of Berta, but for the assassination of many activists.” Despite the efforts of the Honduran government to end their movement for justice, Bertha said, “We will not give up and we will not stop.” The crowd echoed this statement, unanimously chanting, “Berta no no se murió; se multiplicó.”

The following day, Bertha delivered a passionate call for justice to the United Nations.

In addition to Berta’s daughter, speakers at the rally included Lilian Esperanza López, Berta’s colleague from the COPHIN; Yessica Trinidad, the Coordinator of the National Women Human Rights Defenders Network in Honduras; Daysi Flores Hernandez, the Honduras Coordinator for JASS Mesoamerica; Áine O’Connor, a member of the Mercy Global Action Coordinator at the United Nations for the Sisters of Mercy; and Bai Ali Indayla, a Bangsamoro (Moro) activist from Maguindanao, Philippines.

The rally was one of many actions and mobilizations that took place in New York and across the world demanding an end to the culture of repression and impunity.

You can find video coverage of the rally, produced by Blaze Nowara, here (not available).

Democracy Now also covered the rally, and provided an in-depth look at the struggles in Honduras and of the COPINH here.

This struggle is not over, click the following links for ongoing information on demands/action:

WEDO stands in solidarity with human rights and environmental defenders around the world– demanding justice, working for a peaceful and healthy planet for all. We must all continue to bring light to these struggles, and be persistent in our advocacy.

“Berta did not die. Berta became the millions. I am Berta.”
–Women’s Environment & Development Organization, wedo.org
Image: “Javier Couso” by GUE/NGL is licensed under CC BY-NC-ND 2.0