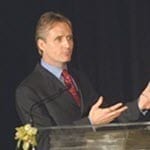 The UK-born Linus Roache has enjoyed a 25+ year acting career in theater, television, radio and cinema across the world. Accolades include a 2002  London evening Standard best actor award for his portrayal of Samuel Taylor Coleridge in Julian Temple’s acclaimed movie “Pandemonium”, a Golden Globe nomination in  2003  for his portrayal of Robert Kennedy in the FX TV movie RFK. With a career that has taken him from Shakespeare’s Richard II to Christopher Nolan’s “Batman Begins” Linus has also starred in the widely popular NBC program, Law and Order, as executive ADA Michael Cutter opposite Sam Waterston.

In 2002 Linus moved to the US with his wife Rosalind. Linus is the managing director of the EnlightenNext Center in NYC. EnlightenNext is a global movement and nonprofit organization dedicated to the evolution of human consciousness and culture founded by Andrew Cohen.