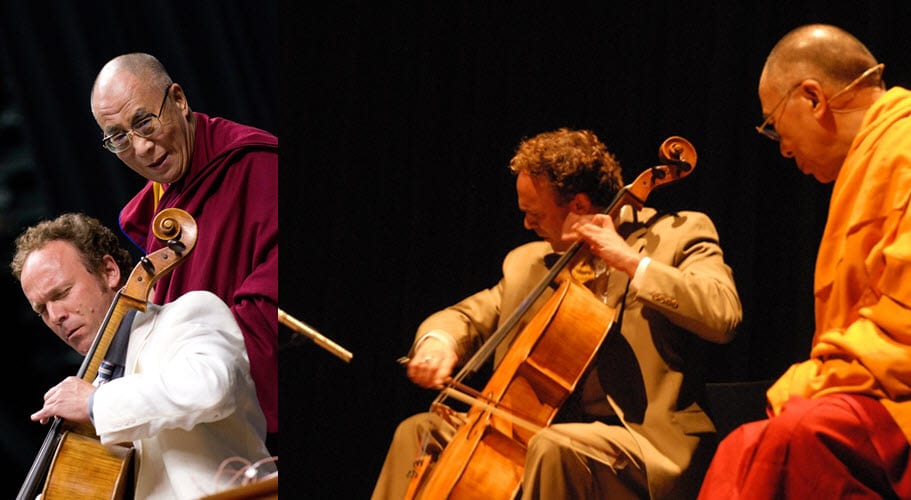 Michael Fitzpatrick is the recipient of the Prince Charles Award for Outstanding Musicianship bestowed by H.R.H. the Prince of Wales. He has worked musically with His Holiness the XIVth Dalai Lama for the past 14 years on the COMPASSION RISING project, which was inspired by the friendship between the late Thomas Merton and The Dalai Lama. His signature composition the Invocation for World Peace was played at the historic meeting between His Holiness the Dalai Lama and United Nations Messenger of Peace Muhammad Ali.

Fitzpatrick has performed for His Majesty King Abdullah II at the Royal Palace in Jordan, at the United Nations Millennium Peace Summit of Religious & Spiritual Leaders, at the Parliament of the World’s Religions in Barcelona, and in Melbourne, Australia. He has performed as concert soloist around the world.

“The emotion of Michael Fitzpatrick’s music is so powerful it seems almost verbalized. His music brings peace to the world.” ~ His Holiness the XIVth Dalai Lama

[vc_row][vc_column][vc_column_text disable_pattern="false" css=".vc_custom_1540853881667{margin-bottom: 0px !important;}"]Founded in 1969 by Arthur Mitchell and Karel Shook, Dance Theatre of Harlem was considered “one of ballet’s most exciting undertakings” (The New...

British pianist Simon Mulligan is, according to the Times of London 'the most abundantly gifted of pianists.' Pulitzer prizewinning composer Paul Moravec calls him 'a pianist with complete mastery of the instrument'; while Herbie Hancock says 'You have a phenomenal...

Motion Theater Lab is a chamber dance company focused on creating works of deep passion and beauty and comprised of seven critically acclaimed performers under the direction of choreographer and dancer Michael Leon Thomas. Mr. Thomas performed principal roles with the...

Climbing PoeTree is the combined force of two boundary-breaking soul-sisters who have sharpened their art as a tool for popular education, community organizing, and personal transformation. With roots in Haiti and Columbia, Alixa and Naima reside in Brooklyn and track...

[vc_row][vc_column][vc_column_text disable_pattern="false" css=".vc_custom_1540918974863{margin-bottom: 0px !important;}"]Impact Repertory Theatre was founded in 1997 by Alice Arien, Jamal Joseph, Joyce Joseph and Voza Rivers. Its mission is to use performing arts and...

[vc_row][vc_column][vc_column_text disable_pattern="false" css=".vc_custom_1540918612616{margin-bottom: 0px !important;}"]Founded in 1969 by Arthur Mitchell and Karel Shook, Dance Theatre of Harlem was considered “one of ballet’s most exciting undertakings” (The New...