Mourning the Deaths of Imam Maulama Akonjee and Thara Uddin 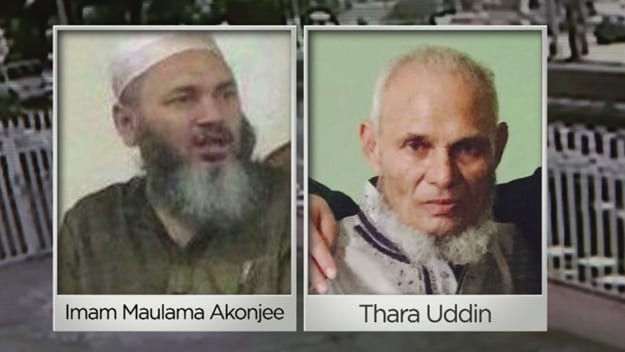 The Temple of Understanding mourns the violent deaths of Iman Maulama Akonjee and Thara Uddin in Queens, New York. In solidarity with these organizations devoted to interfaith education, we would like to share the statements offered by Cordoba House and Tanenbaum.

“Remain patient in adversity just as all of the apostles, endowed with firmness of heart, bore themselves with patience.”
(Quran: 46 – 35)

We are deeply saddened to hear about the tragic shooting of our brother, Imam Maulama Akonjee, and his assistant, Thara Uddin, as they were leaving Al-Furqan Jame Masjid in the Ozone Park neighborhood of Queens, where Imam Akonjee was the mosque leader.

Imam Akonjee, originally from Bangladesh, was 55 years old, and moved to Queens only two years ago. He leaves behind his wife and three children. It has been reported that he was a devout Muslim, and a highly respected and humble man. We understand that he had done some important work to help cultivate peace in his diverse and multi-faith neighborhood.

Our thoughts and prayers go out to the families, friends, and community of Imam Akonjee and his assistant, Thara Uddin, who was 64 years old.

The NYPD has reported that the investigation into the motive for the shooting is still ongoing. It is important for Muslims to exercise patience and endurance, and not make any assumptions on the cause of this murder.

The Quran reminds believers of how to react in times of an attack. “…If you are patient during times of trial and conscious of Him, and an attack (or an enemy) should fall upon you all of a sudden, your sustainer will aid you (for your patience and endurance) with the aid of five thousand angels.” (Quran 3:124)

As an American Imam in a pluralistic and great nation, I call upon people of all faiths to work together to spread peace, tolerance, and understanding within our communities.

Please join me in praying for Imam Akonjee, Thara Uddin, and their families.

Religious leader Imam Maulama Akonjee and his associate, Thara Uddin, prayed together at the Al-Furqan Jame Mosque in Queens before walking outside into the sunlight. Minutes later, they were executed, leaving a community, and a nation, in fear, anger and mourning.

We can’t begin to imagine how a person becomes a cold-blooded killer, possessed by such hatred that they are brazen enough to execute people on a summer afternoon. We may never understand the real motive, but we know the heart-wrenching impact that the deaths of these two men is having on our community.

Not only were they abruptly taken from their families, neighbors and the Al-Furqan Jame Mosque, but the horrific crime is fueling anxiety in Queens and across the nation. Everywhere you look, people are on edge because of rhetoric in the media, hate crimes and acts of terrorism (perpetrated by individuals of varied religions and beliefs). The result is mistrust and division.

This is where we all need to step in, to stand together and not allow fear to break our neighborhoods apart. As a unified group of individuals from different religious and belief traditions, cultures and ethnicities, our call for justice is louder than the fear. It’s time to stand tall and be loud!