Multilateralism in the Temple of Understanding: Presentation by Grove Harris 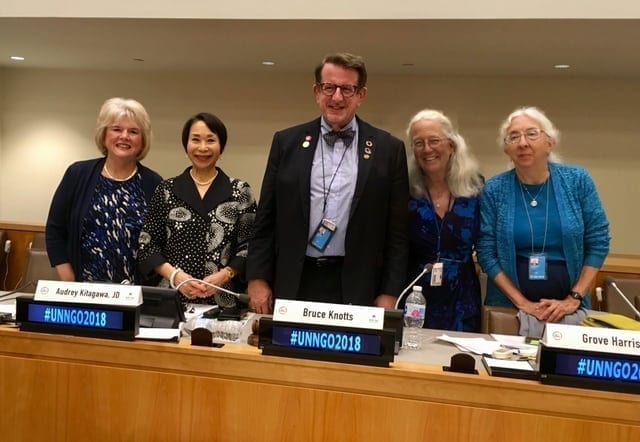 I so appreciate the call and responsibility inherent in this year’s DPI NGO conference theme “We the Peoples: Together Finding Global Solutions for Global Problems.”

And so far at the conference I have heard calls to be loud, to be bold, to find new ways to strengthen our collective work, to bring our work to scale, and to include fresh innovation and imagination.  As civil society space erodes, we have to hold it that space open and attempt to expand it, at the same time being critical and frugal about the flow of time and resources into spaces where our impact is limited. We have to define our own measures of success, and assess where we draw strength and inspiration and build our collective force.

I invite you all to join me in taking a few silent breaths, to remind ourselves of our sources of inspiration and the nourishment we receive in each moment. Thank you.

The Temple of Understanding is one of the oldest interfaith organizations, founded with a mission of building peace among all the world’s religions.  Our multilateralism is built into our current operating structure, where we work in multifaith and interfaith and secular coalitions.  We translate religious concerns into the UN’s secular language of human rights and morality. We are small and focused on networking, joining coalitions and amplifying voices from the margins. Our peace work is pragmatically focused on what makes for peace: food, water and health.  We also ask about the sustaining force of faith, or values, in all we do.

As part of the NGO Mining Working Group (made up of over 30 religious and other groups, with constituencies in over 27 mining countries) we fought for the human right to water to be included in the UN’s Sustainable Development Goal 6. Partnering with secular activists in water justice made this possible, including Meera Karunananthan and Maude Barlow who are global water activists and experts. We then contributed to the production of the Water Justice Guide, intended to help to local communities see which UN mechanisms may help them. Outreach goes to the grass roots constituencies, and the justice guide has gone to every diocese in the Greek Orthodox church.

I have served as a bridge between the Mining Working Group and the Women’s Major Group, facilitating collaboration. While many in the WMG focus on women’s rights to health and reproductive services, I focus on environmental concerns intersecting with gender. WMG includes over 600 organizations across the globe.

Creative strategies have included color themed days and political positions, to lift up the issues and human spirits for change; street actions in NYC, such as upon learning of the murder of front line environmental justice activist Berta Caceres of Honduras.  We created a tribute, using masking tape across mouths pulled off as names of those murdered were read, saying presente.  It was well received, and then used in a UN video coming out of the UNEA conference.  Of grave concern is the growing pattern of labeling activists as terrorists. Standing up for civil rights hopes to disrupt injustice. To conflate it with terrorism is completely inappropriate and endangers the lives of activists.Members of the Women’s Major Group keep coming up with inspiring slogans, tee shirts; I’ve not heard a song yet.  WEDO’s latest is a shirt spelling out the acronym FIERCE –  Fierce, Intersectionalist, Environmentalist, Revolutionist, Climate Activist and Eternal Optimist.

During July’s HLPF (High Level Political Forum), I contributed to a Twitter storm highlighting the increasing murder of women human rights defenders, and the overall impact of the WMG’s social media campaign was over 25 million impressions, reaching 3.7 million people.  And then the next day we were on the street in a solemn protest over the murder of four Columbian human rights activists.

Our fitness for purpose includes condensing our messaging, struggling to work effectively inside the UN and on the ground, and attending to “intersectionality”.  This is one way of approaching “no one left behind” in our coalitions and partnerships.  That means no more “manels”- panels of only men.  Women must be fully included, and men are also included.  Youth, Indigenous people, LGBTQI, People of Color, seniors, and those with disabilities must be included not as a laundry list, not perfectly, but with effort and in respect. So while I can not fully attend to all causes, I practice inclusion.

Of course we collaborate with all the groups represented on this panel, the Parliament of the World’s Religions, the Interfaith Center of New York, and the United Religions Initiative.

I want to name some of the amazing women we have worked with:

Our model is one of power with others, versus power over others. We listen and include. We stand with our Muslim friends in protesting Anti-Muslim discrimination, and we admire and promote the social justice and environmental work of our Indigenous colleagues.

Just as all UN agencies and civil society actors at the UN have been called to ensure we are fit for purpose, so too the interfaith movement must ensure it is fit for purpose, by examining any ways in which we miss the mark of the human rights standards. “Leave no one behind” is the motto of the UN’s Sustainable Development Goals. Is the Interfaith movement leaving anyone behind? Are we fully inclusive of women? Youth? Indigenous people? LGBTQI folks? People of color? All religious perspectives?

The world’s religions are among the largest multinational organizations in the world. We must amplify our collective voice and demand action on crucial issues including climate change and social justice.[/vc_column_text][/vc_column][/vc_row]