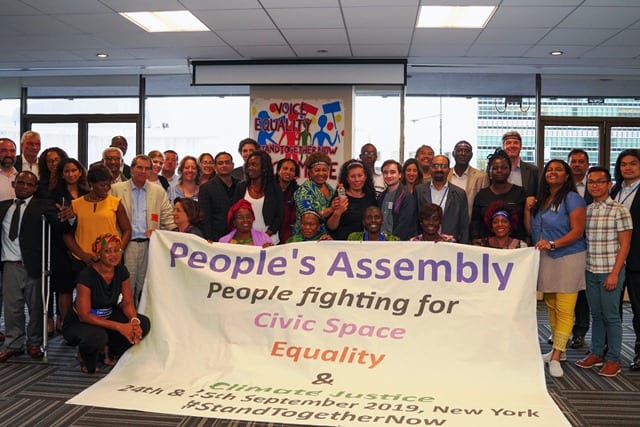 [vc_row][vc_column][vc_column_text css=”.vc_custom_1572474597805{margin-bottom: 0px !important;}”]The Temple of Understanding participated in the recent People’s Assembly in New York City, Sept 24- 25, 2019 as civil society gathered on the outskirts of the UN’s General Assembly to raise our voices in unison.  The outcome document is a comprehensive call to action.

We are in the midst of a climate emergency. We face imminent danger of mass extinctions of our ecosystems, biodiversity loss and even more human suffering. If we carry on as we are, we will not reach the commitments set out by governments in the Paris Agreement. We will not keep global warming under 1.5 degrees Celsius. This will push 100 million people into poverty, undoing the work of the SDGs. Those on the frontlines of this climate emergency have contributed the least to it and are often already the most marginalized and impoverished communities. They face extreme and unpredictable weather which destroys their livelihoods, habitats and traditions. They include women, young people, Indigenous Peoples, minorities, those facing discrimination based on work or descent, older people, persons with disabilities and people living with HIV.

While we all must mitigate and adapt, the main responsibility lies on those who got us here in the first place. Developed countries have been negligent and they are the most responsible for driving the shift we urgently need. They have the financial and technical capacity to take the lead and support developing countries to transition to resilient, low carbon economies. Incremental adjustments and false technological solutions are not enough. We need seismic shifts in the current fossil-fuel driven political, economic and financial system. We need more investment in adaptation and resilience. We must work to reclaim our food systems from the grip of the powerful corporate agribusinesses that have concentrated land and wealth in fewer and fewer hands, driven climate change, deforestation, and soil loss.

Climate and environment concerns need to be meaningfully mainstreamed across all sectors – public and private – so that human activity on earth is collectively working towards the Paris Agreement. Human rights must be at the core of our work on climate change. It must recognise that different people face unique vulnerabilities in the face of climate change and have unique voices and solutions to share. It must also recognise the unique threats faced by environmental defenders, including women. It must acknowledge the tireless work of those on the frontlines of the climate emergency in protecting the environment. There can be no climate justice without gender justice, without safeguarding the rights of Indigenous Peoples, and without just transition that builds resilience and leaves no one behind. We must pursue approaches like agroecology that work with nature instead of against it, and put power and knowledge back in the hands of farmers.

We call for all Governments to:

We call on the international community (including the United Nations) to: