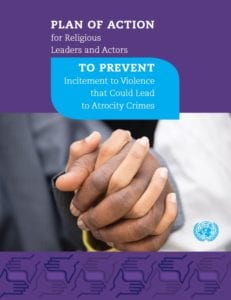 On March 22, 2019, the final day of the CSW, I attended a side event on “Preventing Gender-based Violence: The Role of Religious Actors.” It was co-sponsored by the Permanent Missions of Botswana and Finland to the United Nations, the UN Interagency Task Force on Religion (co-stewarded by the UN Office for Genocide Prevention, UNAIDS, UNFPA, UN Women), and the ACT ALLIANCE.

From the event description:

“The interactive discussions will assess the specific contributions of faith-based and faith-inspired actors, when partnering with governments and UN system entities, to deal with diverse forms of gender-based violence. The conversations aim to contribute to the wider discussion and mobilisation around the implementation of the landmark ‘Plan of Action for Religious Leaders and Actors to Prevent Incitement to Violence that Could Lead to Atrocity Crimes.’”

The room was full, indicating the high level of interest in this topic. Mr. Dieng, United Nations Under-Secretary General on the Prevention of Genocide and the Responsibility to Protect, opened the session via video. His exemplary work is documented with video and written statements available.

Muslims for Progressive Values President Ani Zonneveld spoke on hate speech and her work on empowering reform of education in Muslim societies. She suggested that rather than investing in funding travel to international speaking opportunities for high-level men, the same funds could bring youth to advocacy training camps for better net result.

The rights of LGBTI individuals were brought up as part of the commitment to leave no one behind. It is no longer acceptable to allow religious or cultural attitudes to infringe on the basic human rights of all. The event was sponsored by the Office of the Special Adviser on the Prevention of Genocide (OSAPG) and co-sponsored by UN WOMEN, UNFPA, UNAIDS and ACT Alliance.

I was honored to attend an earlier expert consultation, part of this line of work on preventing genocide, entitled “Preventing Polarization, Building Bridges and Fostering Inclusivity: The Role of Religious Actors” held in NYC earlier in March. This brilliant session brought academics and religious actors to the table, and a publication is planned.

A previous session focused on religion and ultra-nationalism. The dedication and effort of Simona Cruciani and others working on this initiative are phenomenal.