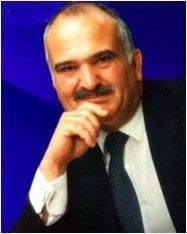 His Royal Highness Prince El Hassan bin Talal served as Crown Prince to the Hashemite Throne of Jordan from 1965 to 1999 serving as acting Regent for his brother, His late Majesty King Hussein. He has initiated and founded a number of Jordanian and international institutes including, The Higher Council for Science and Technology, in 1987, The Royal Scientific Society, in 1970 and The Royal Institute for Inter-Faith Studies, in 1994.

On the international stage, Prince Hassan founded the International Cultures Foundation in 2002 out of which the Parliament of Cultures was formed in 2004. HRH launched Partners in Humanity as a joint initiative with John Marks from Search For Common Ground. Decorated by over twenty nations, His Royal Highness is the holder of the Order of Al Hussein bin Ali, Jordan’s highest decoration. He is the author of nine books including, Search For Peace (1984). He is being honored for his life-long commitment to foster interfaith and cross-cultural cooperation for peace.