The Perspective of Religious Naturalism Dialogue 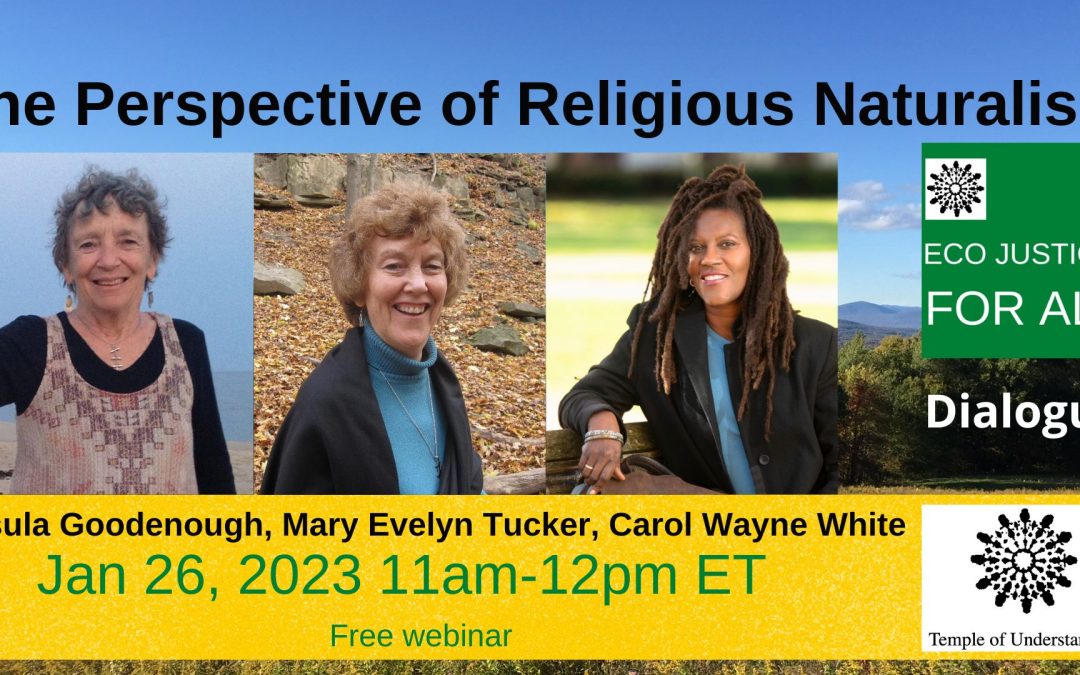 ECO JUSTICE FOR ALL Dialogues present

The Perspective on Religious Naturalism

About our Dialogue Speakers:

Ursula Goodenough is Professor of Biology Emerita at Washington University who retired to Martha’s Vineyard in 2017. She taught cell biology and evolution and engaged in research that focused on the sexual cycle of a green soil alga. She is a fellow of the American Academy of Arts and Sciences and served as president of the American Society for Cell Biology. She and many others are developing what is called a religious naturalist orientation. A new edition of her book describing her understandings of this orientation will be published by Oxford University Press in February, 2023. She is the proud mother of 5 children and 9 grandchildren.

Carol Wayne White is Interim Director of the Griot Center (2022-23) and Professor of Philosophy of Religion at Bucknell University, specializing in Poststructuralist Philosophies, Process Philosophy, Religious Naturalism, Science and Religion, and Critical Theory. Her books include Poststructuralism, Feminism, and Religion Triangulating Positions; The Legacy of Anne Conway (1631-70): Reverberations from a Mystical Naturalism, and Black Lives and Sacred Humanity: Toward an African American Religious Naturalism, which won a Choice Award for Outstanding Academic Titles. White has published numerous essays, articles, and contributing chapters in philosophy of religion and on religious naturalism; her work has also appeared in Zygon: The Journal of Religion and Science, The American Journal of Theology and Philosophy, Philosophia Africana, and Religion &amp; Public Life. White has received international awards and national fellowships, including an Oxford University Fellowship in Religion and Science, a Science and Religion Grant from The John Templeton Foundation, and a NEH Fellowship.

Mary Evelyn Tucker teaches at Yale University at the School of the Environment and the Divinity School. She is co-director with John Grim of the Yale Forum on Religion and Ecology. With Grim she organized 10 conferences on World Religions and Ecology at Harvard. They were series editors for the 10 resulting volumes from Harvard. With Brian Thomas Swimme, Tucker and Grim created a multi-media project Journey of the Universe that includes a book (Yale, 2011), an Emmy Award winning film, a series of podcast Conversations, and free online courses from Yale/Coursera. She served as vice president of the American Teilhard Association from 1978-2020. Tucker was a member of the Earth Charter Drafting committee and the International Earth Charter Council. She won the Inspiring Yale Teaching Award in 2015 and has been awarded 5 honorary degrees. With John Grim, she received a Lifetime Achievement Award from the International Society for the Study of Religion, Nature, and Culture.

ECO JUSTICE FOR ALL interviews and dialogues are ongoing programs produced by the Temple of Understanding, incorporating our outreach in the area of environmental awareness and advocacy. We present a diverse range of perspectives, from scientific to spiritual views, on the climate emergency and offer a variety of solutions that we can all do easily and effectively in our everyday lives. World religious and spiritual visionaries, Indigenous leaders, scientists and social scientists, environmental activists, artists, musicians and writers, youth and elders, local and global people, all come together to address the urgency of the climate crisis through these ongoing interviews and dialogues.

See all our programs on our ECO JUSTICE FOR ALL youtube channel.