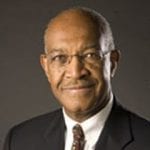 The Rev. Dr. James A. Forbes served as Senior Minister of The Riverside Church for 18 years and is currently President of the Healing of Nations Foundation. Before serving at the Riverside Church, Rev. Forbes taught at Union Theological Seminary, where he first served as the Brown and Sockman Associate Professor of Preaching until he became Union’s first Harry Emerson Professor of Preaching in 1985. Dr. Forbes has been lauded by Newsweek and Ebony and is globally recognized as one of the most effective preachers in the English-speaking world.  He is ordained as a minister in the American Baptist Churches and the Original United Holy Church of America.