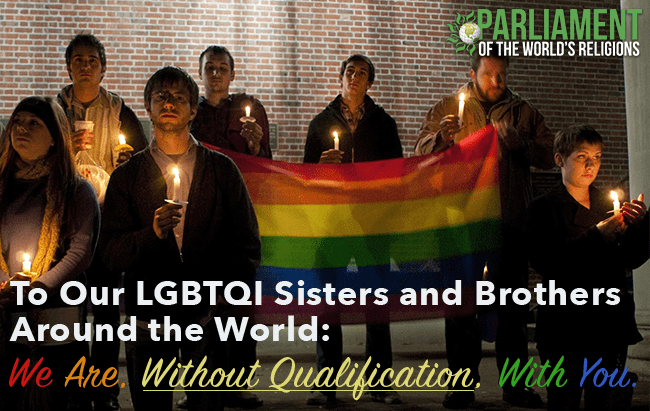 The Temple of Understanding stands with Parliament of the World’s Religions in grief and anger:

To the friends, families, and neighbors of the victims in Orlando: We, the global community of the Parliament of the World’s Religions, are with you.

To ourselves: We must reclaim a global ethic.

At the closing of the 1993 Parliament of the World’s Religions, a foundational declaration was released entitled Declaration Toward a Global Ethic, a document that serves as a moral compass guiding the Parliament’s work. It resolutely prohibits hate, discrimination, and murder on any basis as “irrevocable.”

In the great ancient religious and ethical traditions of humankind we find the directive: You shall not kill! Or in positive terms: Have respect for life! Let us reflect anew on the consequences of this ancient directive: All people have a right to life, safety, and the free development of personality insofar as they do not injure the rights of others. No one has the right physically to torture, injure, much less kill, any other human being. And no people, no state, no race, no religion has the right to hate, to discriminate against, to “cleanse,” to exile, much less to liquidate a “foreign” minority which is different in behavior or holds different beliefs.