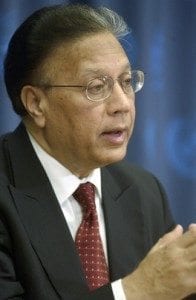 The UN General Assembly elected its next Secretary-General on October 13 — António Guterres of Portugal, the ninth man to hold the position. Ambassador Anwarul Chowdhury, former Under-Secretary-General and High Representative of the UN, spoke on his disappointment that the position has not yet been held by a woman.

The Council members were totally insensitive to a groundswell of support worldwide for a woman as the next Secretary-General. They advanced the legacy of ignoring the 50 per cent of humanity in their action. This is an absolute aberration of the system whereby the 15 members of the Council impose their choice prompted by P-5 pressure and manipulation upon the total membership of 193, not to speak of wide swath of civil society opinion and activism for a woman Secretary-General.

It is so very unfortunate that in the selection process politics has trumped women’s equality, violating UN Charter’s article 8 which underscores the eligibility and equality of men and women to participate in any capacity in all its organs – principal or subsidiary.