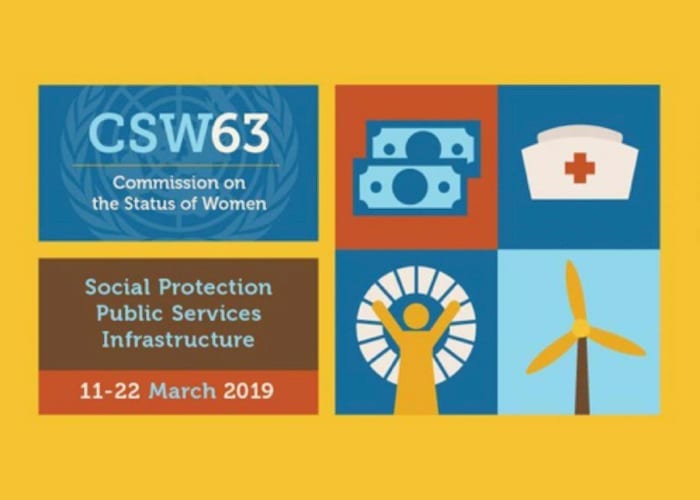 The Temple of Understanding presents

A 63rd Commission on the Status of Women Parallel Event

This interactive panel will focus on pragmatic aspects of women’s empowerment and sustainable development. Speakers include Puerto Rican women working towards a citizen’s audit of the debt, a chaplain working on ratification of CEDAW in the US, and a former guerrilla now grandmother speaking on personal practices of peace. All aim to equip communities and individuals to create justice and transformation, with a focus on gender justice. Inspiration and perseverance are fostered by song and solidarity. We conclude by offering multiple avenues for engagement.

Eileen Llorens is an activist in Puerto Rico working collaboratively with many women on projects such as the citizen’s debt audit. She is also passionate about health care. She will speak in person, along with her daughter, and colleagues will be included via Skype. We are reaching out to NYC-based Puerto Rican activists to join the session to help build solidarity for this essential justice work.

Katherine Power uses her very public inner journey from the politics of rage toward the practices of peace to lead us in expanding our own vision. Her practices guide us beyond our repetitive head-to-head struggles into all the ways that new things come into being and old orders are passed away.

She did not set out to be a terrorist. As a student activist, she moved from protesting the war in Vietnam to waging guerilla war to overthrow the government. A bank robbery undertaken to finance this “revolution” resulted in the murder of Boston police officer Walter Schroeder. After fleeing and living as a fugitive for 23 years, she surrendered to authorities in 1993, pled guilty to armed robbery and manslaughter, and served six years in prison.

Katherine Power’s current spiritual work arises from Buddhist texts and Christian hymns, from a Muslim preacher and Jewish ritual traditions, from the indigenous and the postmodern, from rhododendron flowers that spoke and from ancient tales, from science, myth, archetypes, wisdom traditions, and the lived life.

Rev. Dionne Boissière serves as the chief steward of the Church Center at the United Nations, where she ensures that the Church Center provides sacred space, worship, hospitality, community services and a forum for partners and civil society to engage in transformative education that seeks to empower and build the things that make for peace.

Rev. Boissière is the first woman of African Descent to hold this significant position in the history of this New York ecumenical and inter-faith landmark. CCUN exists to expand the ecumenical community’s capacity and access to the United Nations in order to bring greater voice to the broad moral and ethical concerns of the church in international affairs, peacemaking and global advocacy. Owned and operated by United Methodist Women, it is the home to over 50 denominational offices, religious and secular non-governmental organizations that are commissioned to liaison with U.N. officials and governmental delegates.

Kristin Hoffmann is a Juilliard-trained multi-instrumentalist, with a transcendental ability to take audiences on a journey of deep awakening to Spirit. Her music has been heard on major record labels, film and television, and she has performed throughout the world, collaborating with creative luminaries on projects ranging from individual albums to grand symphonic productions.

A strong advocate for peace and ocean conservation, Kristin has appeared internationally at environmental concerts and conventions: TEDx San Francisco, The Emoto Peace Project concert in Tokyo, the Unity Earth global event series, at the signing of The Fuji Declaration, and with The Royal Philharmonic Orchestra in London. In August 2016, the symphonic version of her “Song for the Ocean” was performed at Sydney Opera House by a choir of 800 Australian children. Kristin is the vocalist and keyboardist for the acclaimed show, BELLA GAIA, a multimedia theater experience created in conjunction with NASA. She is an inductee of the group Evolutionary Leaders and an active board member of FIONS (Friends of Institute of Noetic Sciences). “My goal is to spread love, light, peace and awareness into the world through the vehicles of music and energetic frequency.”

Grove Harris, MDiv is an eco-justice and religious diversity educator and advocate who brings diverse grassroots perspectives to an international agenda. She currently serves as Representative to the United Nations for the Temple of Understanding, where she has developed justice initiatives related to food sovereignty, human right to water, interfaith education, and women’s initiatives in the context of the UN’s Sustainable Development Goals for 2030.

Grove was Consulting Producer for the short film Roots of Change: Women, Food Sovereignty, and Eco-Justice (2016), in which she is featured along with other speakers on women’s initiatives and food justice. Her past positions include Program Director for the 2009 Parliament of the World’s Religions and Managing Director for the Pluralism Project at Harvard University. Her Master of Divinity degree from Harvard Divinity School (1996) incorporated studies of organizational development and business management into the study of religion and ethics.

The Fifth Annual Interfaith Service of Gratitude and Remembrance 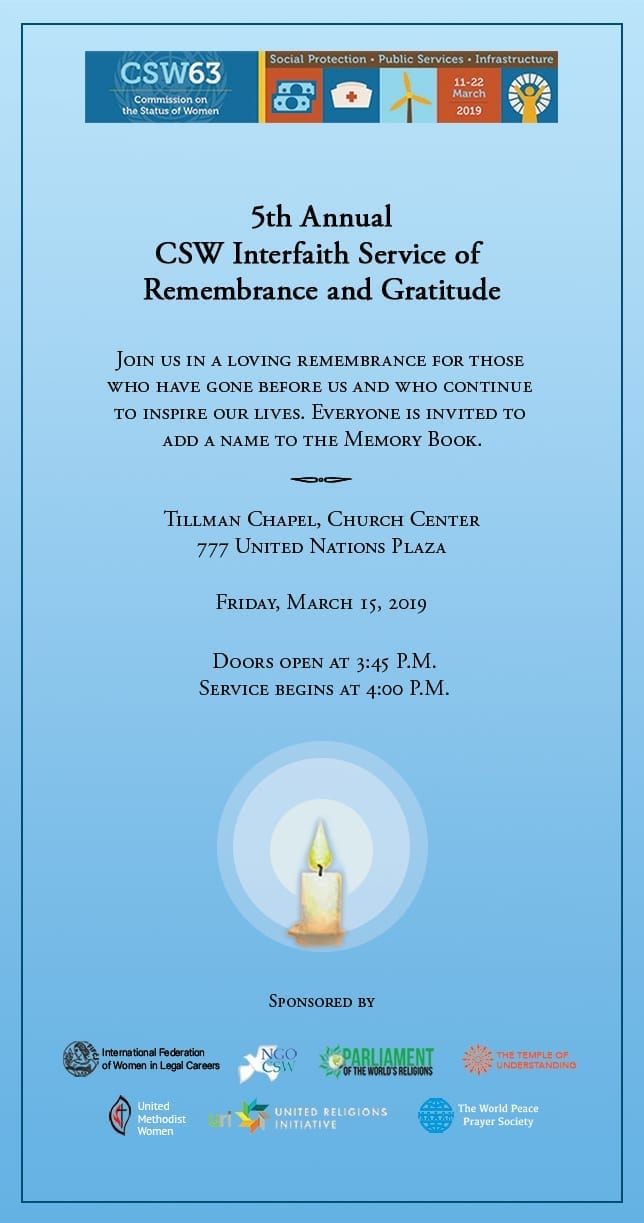 Conversations on Social Cohesion: Stories of Women, Faith, and Leadership 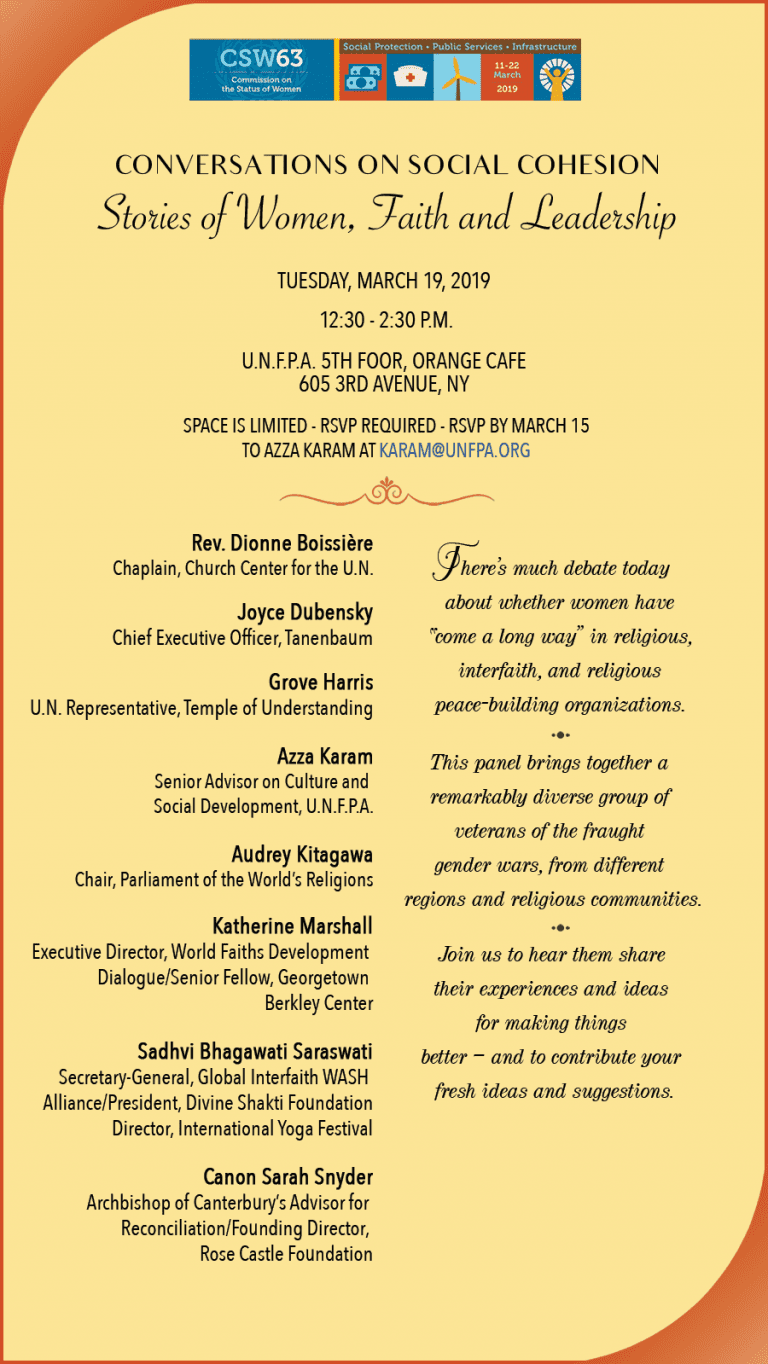