TOU Events at the Parliament of the World’s Religions Conference 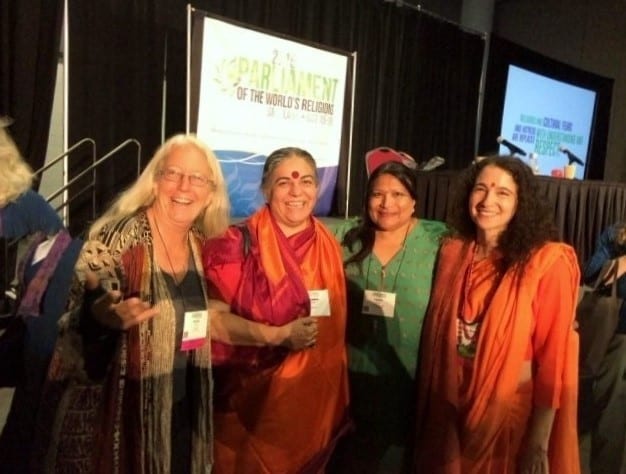 Grove Harris is an environmental activist at the United Nations, representing the Temple of Understanding. She works with the Mining Working Group towards SDGs based on human rights, rather than exploitation. Previously, she was the Program Director for the 2009 Parliament of the World’s Religions, and she consults, speaks, and writes about religious diversity in
America and the interfaith movement. She works on an organic farm, and paints spiritually with recycled materials.

Azza Karam is an Egyptian, and serves as a senior advisor on culture at the United Nations Population Fund (UNFPA) where she also coordinates a UN Inter-agency Task Force on Engaging with Faith-Based Organizations. She has previously managed international programmes and written extensively on democratization, conflict and gender related issues.

Denise Scotto is an attorney at law, policy advisor and international speaker. She also represents the International Federation of Women in Legal Careers and other NGOs at the UN. Denise’s background includes working in the United
Nations Department for Economic & Social Affairs (DESA), serving on the executive board of the UN Staff Recreation Council Enlightenment Society and the Values Caucus at the UN. She is an interfaith minister.

Monica Willard represents the United Religions Initiative at the United Nations. She is co-chair of the International Day of Peace NGO Committee at the UN and works with the UN Department of Public Information to organize the annual Student Observance of the International Day of Peace (Sept 21). As president of the Committee of Religious NGOs at the UN from 2011-13, she was instrumental in establishing World Interfaith Harmony Week events at the UN, including two in the
General Assembly sponsored by the President of the General Assembly. Monica was a founding member of the Tripartite Forum for Interfaith Cooperation for Peace and Development that included United Nations Member States, Agencies and Religious NGOs.

Peter Adriance is the representative for Sustainable Development, U.S. Baha’i Office of Public Affairs, 13201 19th St. NW, Suite 701, Washington, DC 20036, 202-833-8990, www.publicaffairs.bahai.us/sustainable-development, padriance@usbnc.org
Mr. Adriance has represented the Baha’is of the U.S. nationally and internationally on issues of sustainable development for more than two decades. He helped to found and administer several civil society networks in preparation for UN conferences and related events. He works to build understanding and appreciation for the ethical and spiritual dimensions of sustainability. He serves on the governing board of the International Environment Forum – a Baha’i-inspired organization addressing the
environment and sustainable development.

Dr. Vandana Shiva is a world-renowned environmentalist and activist. In 1991, she founded Navdanya, a national movement to protect the diversity and integrity of living resources – especially native seed – and to promote organic farming and fair trade, serving more than 500,000 men and women farmers. Dr.Shiva’s work spans teaching at universities worldwide, to working with peasants in rural India, to serving on expert environmental groups for governments around the world. For the last two decades, Navdanya has worked with local communities and organisations, serving more than 500,000 men and women farmers, conserving more than 3000 rice varieties from across India, and establishing 60 seed banks in 16 states across the country.

Starhawk is the author of many works celebrating the Goddess movement and Earth-based, feminist spirituality. She’s a peace, environmental, and global justice activist and trainer, a permaculture designer and teacher, a Pagan and Witch. In her twelfth book, The Empowerment Manual: A Guide for Collaborative Groups, Starhawk draws on four decades of experience in circles and collectives to show us how to foster connection, clear communication, and positive power in ourselves and our groups.