Intervention at the United Nations Permanent Forum on Indigenous Issues

We recommend that a study on sacred waters be conducted on the effects of extractive industries’ impacts on freshwater in North and South America (Turtle Island) including groundwater and sacred waters.

Agenda Item 4: Implementation of the six mandated areas of the Permanent Forum with reference to the United Nations Declaration on the Rights of Indigenous Issues

Presented by Betty Lyons (Onondaga Nation),
President of the American Indian Law Alliance on 19 May 2016

3. We the Haudenosaunee, along with all Indigenous peoples, have a sacred relationship with and a mandate to speak for those things that can’t speak for themselves. The laws we live by regarding Mother Earth have been handed down from time immemorial. We need to stay mindful that these are gifts and should be met with gratitude and conservation. Water is a most precious gift, without her there would be no life.

4. We acknowledge that all living beings on Mother Earth have a purpose with specific duties and responsibilities. We affirm that all of humanity has a responsibility to protect Mother Earth and her life sustaining forces for all, but most thoughtfully for the seventh generation yet unborn. Indigenous peoples do not compartmentalize the environment, water, health, culture and our wellbeing. Everything is interrelated and cannot be neatly separated. We are not separate from our identity, culture or Mother Earth but we are one with them.

5. The continuing effects of the Doctrine of Discovery have many Indigenous Nations facing the same issues in the protection of their lands, waters and resources. Our Indigenous sisters and brothers, while in peaceful protest, are being detained, criminalized, persecuted and killed daily, to protect their homelands from extractive industries and member states in their never-ending quest for the consumption of natural resources. We are left with the devastation of pipelines, toxic waste disposal, mining, dams, as well as hydraulic fracturing and tar sands in our territories.

6. We affirm these are violations of the UNDRIP, the UN Charter, nation-to-nation treaties and conventions. We should always remember that the laws of nature and the rights of Mother Earth supersede all other laws.
7. We acknowledge the resolution adopted by the General Assembly on 22 December 2015 on Harmony with Nature, “Recognizing that a number of countries consider Mother Earth the source of all life and nourishment and that these countries consider Mother Earth and humankind to be an indivisible, living community of interrelated and interdependent beings.”

8. We are deeply concerned with the condition of Mother Earth’s fresh water lakes, rivers, streams, springs, tributaries and watersheds.

9. In keeping with the theme of the 15th Session of the United Nations Permanent Forum on Indigenous Issues, “Indigenous peoples: conflict, peace and resolution,” we wish to highlight Onondaga Lake, located in the Onondaga Nation’s original territory, is our sacred lake and is the birthplace of democracy. The Haudenosaunee Confederacy was formed when the Peacemaker came to the shores of Onondaga Lake delivering the Great Law of Peace, bringing the message of peace, the power of unity and the power of the good mind. Our sacred Onondaga Lake remains the second most polluted lake in the world.

10. We note that water issues affect Indigenous Peoples across the globe. We know in our communities, each one of our six Nations is affected by serious water issues. For many Indigenous Peoples, there is no water treatment plant. We drink the water as it is, from our rivers and lakes. We have to consider who is downstream, as our water is affected by every interaction we have with it. From the Yaqui River to the Saint Lawrence River, our waterways are in desperate need of healing.

11. We wish to remind member states of Article 29 of the UNDRIP which establishes that Indigenous Peoples “have the right to the conservation and protection of the environment.” In the 2011 publication entitled, Report of the Special Rapporteur on the rights of indigenous peoples by James Anaya in paragraph 31, “With respect to the negative impact of extractive operations on water resources, it was noted that water resource depletion and contamination has had harmful effects on available water for drinking, farming and grazing cattle, and has affected traditional fishing and other activities, particularly in fragile natural habitats.”

12. We are deeply saddened and hold in our hearts our many sisters and brothers that have lost their lives in the effort to keep our sacred waters safe. Indigenous peoples are not the aggressors and will never give up looking for a peaceful resolution and cleanup of our waters as provided for under Article 28 of the UNDRIP.

13. We recommend that a study on sacred waters be conducted by Permanent Forum Members Dalee Sambo Dorough and Grand Chief Ed John on the effects of extractive industries’ impacts on freshwater in North and South America (Turtle Island) including groundwater and sacred waters. This study could explore the ways in which the contamination regarding sacred waters results in a loss of culture for Indigenous Peoples, as well as the catastrophic effects on the health, reproductive health, emotional, physical and spiritual well being of our women, communities, Nations and our youth. This study could give special attention to the affects on women and children.

14. We recommend all member states take action to implement and enforce the UNDRIP and assist in the cleanup of all sacred waters. All of humanity will stand to gain from it and could be used as a model of best practice within the UN fora and the world stage.

15. We affirm that member states and extractive industries, operating or seeking to operate in Indigenous territories, have the full free, prior and informed consent of the particular Indigenous Nation and other provisions as provided for under UNDRIP Articles 8, 25, 26, 28, 29, 32, and 37.

Click the image for a video of Betty Lyons, President of AILA, delivering the statement: 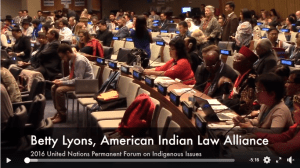