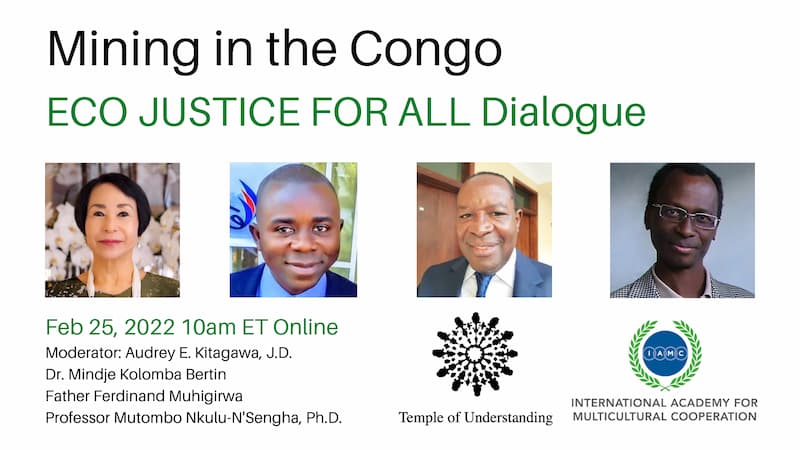 “Mining in the Congo”

“When the last tree has been cut,

when the last river has been poisoned,

when the last fish has been caught,

Then we will find out that we can’t eat money”

This Native American adage captures well the problematic nature of mining exploitation which is the focus of this panel. In 1939, Albert Einstein sent a letter to President F.D. Roosevelt urging him to give particular attention to securing a supply of uranium ore for the United States from the Congo. Recently, in an article published in 2017 in the Bloomberg News, Thomas Wilson stated that “We’ll All Be Relying on Congo to Power Our Electric Cars,” because Congo supplies much of the cobalt needed for electric vehicles. While this technological revolution is hailed by many as one of the solutions to our climate change conundrum, others have pointed out that mining exploitation produces toxic pollution harmful to the environment, poisoning rivers and generating health and respiratory illnesses that afflict many people in poor nations. This panel intends to discuss the ethical, spiritual, economic and geopolitical implications of mining exploitation in Africa, and particularly in the Democratic Republic of the Congo, a country blessed with vast mineral deposits, and yet marred in misery and incessant armed conflicts. As a popular African saying has it, “mineral wealth has turned into a curse for the African people who are becoming capitalists without capital and nationalists without nation.”

Moderator: Audrey E. Kitagawa, J.D. is President and Founder of the International Academy for Multicultural Cooperation, a platform for ushering in a purposeful and hopeful vision for humanity. She is President of the Light of Awareness International Spiritual Family and former Advisor to the Office of the Special Representative of the Secretary-General for Children and Armed Conflict at the UN. Kitagawa is a UN Representative for the United Religions Initiative, Chair Emerita of the NGO Committee on Spirituality, Values and Global Concerns and an Ambassador for Religions for Peace. Kitagawa has been enstooled into the royal family as the Nekoso Hemaa, (i.e. Queen Mother of Development), of Ajiyamanti in Ghana, West Africa, and has a school which she helped to build named after her, the Nana Ode Anyankobea Junior Secondary School. She is the recipient of the Spirit of the UN Award and was conferred an Honorary Interfaith Minister degree by the New Seminary.

Dr. Mindje Kolomba Bertin teaches Pediatric Medicine at the School of Medicine, University of Kamina in the DR Congo. After his studies in Medicine at the University of Kamina (2015), he obtained a certificate in the “Fundamentals of Epidemiology” (University of Washington, 2021). In 2008 he received specialized training in Aircraft, Fire-fighter and Rescue Procedures” organized by the MONUC (The United Nations Organization Stabilization Mission in the Democratic Republic of the Congo.)

Dr. Prof. Muhigirwa Rusembuka Ferdinand S.J. is a Jesuit Father and President and Rector of Loyola University of Congo where he is also a Professor of Social Philosophy. He received his training in the Congo, Kenya, Italy, Canada, and the USA. After research at Boston College, he obtained his PhD in Philosophy at the Pontifical Gregorian University in Rome with a thesis on Human Development. Dr. Prof. Muhigirwa has written extensively on issues of Development in Central Africa. Dr. Prof. Muhigirwa is a Board Member of CERN (Episcopal Commission for Natural Resources) of the Observatory National Episcopal Conference of Bishops of Congo (CENCO). As an expert in Development and Mining governance in the Congo, he has spoken at the US Senate, at the European Parliament, at the International Conference of the Great Lakes Region (ICGLR), at the Heads of State Summit.

Dr. Mutombo Nkulu-N’Sengha was born in the DR Congo and is a Professor at California State University, Northridge, Religious Studies Department, where he created the Global Village Forum. He teaches courses in African Religions, American’s Religious Diversity, and comparative religions. He is a member of the Global Dialogue Institute, and of the Center for Global Ethics. After a Masters in Philosophy (in Africa) and a Masters in Theology (Rome), he pursued graduate studies in the USA where he prepared a Doctorate in Religion and Human Rights at Temple University (Philadelphia) and a Masters in African American Studies. He is presently working on two projects: on just war theory and the African response to war on terror; and African religion and violence against women. He is also working on two books: one on African theology of human rights, and the other on African contributions to world religions and world peace.