In Memoriam, by Alison Van Dyk 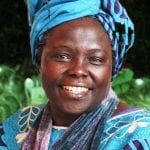 The Temple of Understanding Board of Trustees is deeply saddened to hear of the passing of a great leader of the International Environmental Movement, and a Nobel Peace Prize recipient, Wangari Muta Maathai. I first met Dr. Maathai in 1988 at the co-sponsored Temple of Understanding and Forum for Spiritual and Parliamentary Leaders Conference in Oxford, UK . But it was not until years later when she came to New York that Board member Mary Davidson and friend, Daniel Martin and others informally introduced me to her. This was the early 1990’s when the GBM was building support by organizing trips to Africa.

Although I was not able to go on one of those trips, I was impressed by Wangari’s keen insight into the relationship between poverty and environmental degradation. She had a way of cutting to the essential core of every issue and acting on them: women’s rights as they are related to planting trees for instance. At the TOU, we are carrying on Wangari’s inspiration to create an ethical framework for sustainable development deliberations at the United Nations.

In 2001 Wangari agreed to be a Hollister Award recipient. The event was scheduled for 9-11-01 so Wangari was in New York when the Twin Towers were hit. The energy and grief of that day was devastating but Wangari, who always looked for the silver lining in any situation, was glad that she could be there for a friend who lost a son in one of the towers.

Our Hollister Award Ceremony was rescheduled for 2002. We honored both Dr. Wangari Maathai and Dr. Thomas Berry. Looking back on this event, I realize that we were so fortunate to have brought together two luminaries of the environmental movement. I am quite certain that Wangari’s work, like Tom’s, will grow and strengthen as more people learn about the Green Belt Movement after her passing.

To me, Wangari was truly an enlightened soul whose presence illuminated each of us with a desire to return to our roots, to nature and to that which sustains us. She had a presence that touched everyone who met her, enabling them to see their own path a little more clearly. May she rest in Peace.