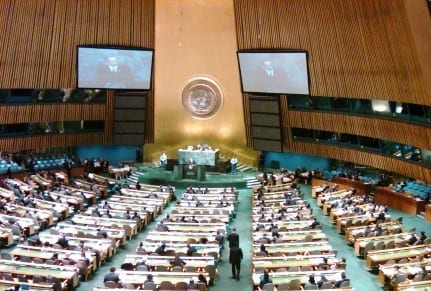 World leaders from around the world gathered at the United Nations Headquarters from September 20-22, 2010 for a high-level plenary meeting of the General Assembly on the Millennium Development Goals (MDGs).

The MDGs adopted by the United Nations Millennium Declaration in 2000 committed nations to a new global partnership to reduce extreme poverty with timebound targets to be accomplished by 2015.

H.E. Mr. Shimon Peres, President of the State of Israel declared that Israel is committed to the Millennium Development Goals, sharing the burden of saving the world from war and hunger. “Without peace, poverty will remain. Without food — peace will not prevail.” Mr. Peres further spoke, “We left Gaza on our own initiative. Completely. We are now negotiating with the Palestinians in order to realize and two-state-solution: A Jewish state, Israel. An Arab state, Palestine. There is no other peaceful alternative. And I believe we shall succeed.”