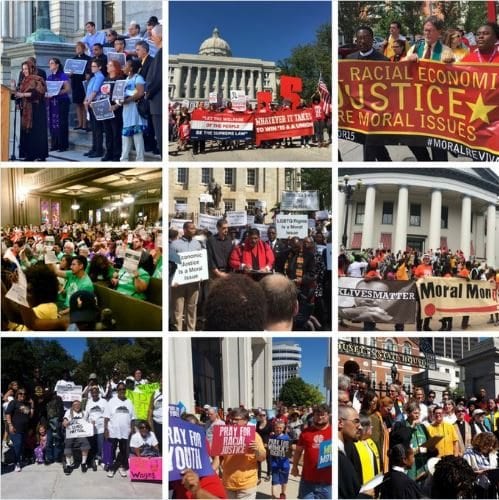 On September 16, Repairers of the Breach called for a Moral Day of Action. What an amazing turnout as we all prepare for the November election!

In 30 state capitols and the District of Columbia, rabbis, imams, priests and preachers stood with people impacted by unjust policies to declare, in one voice, that some issues are not liberal or conservative, but right versus wrong.

“I was in tears as I watched hundreds of news stories come in from across the country, and saw the faces of so many impacted persons and moral leaders through images and videos shared on Twitter. In fact, I learned during our press conference in Raleigh that our coordinated actions was the highest trending topic on Twitter through the #MoralDayofAction, #MoralRevial, and #MoralAgenda hashtags.” –Rev. Dr. William J. Barber II

Rev. Dr. Barber is Pastor of Greenleaf Christian Church, Disciples of Christ in Goldsboro, North Carolina and architect of the Forward Together Moral Movement that gained national acclaim with its Moral Monday protests at the North Carolina General Assembly in 2013. These weekly actions drew tens of thousands of North Carolinians and other moral witnesses to the state legislature.

What are the next steps? Repairers of the Breach say: