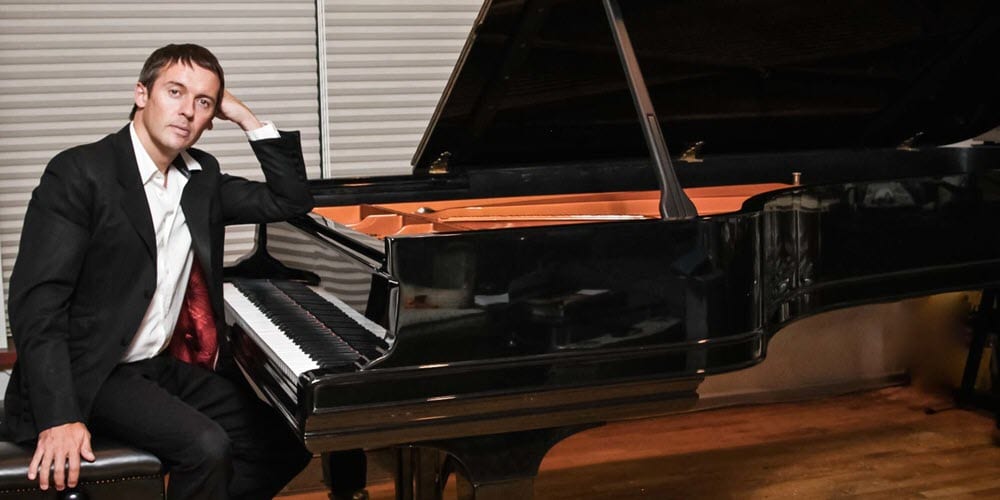 British pianist Simon Mulligan is, according to the Times of London ‘the most abundantly gifted of pianists.’ Pulitzer prizewinning composer Paul Moravec calls him ‘a pianist with complete mastery of the instrument’; while Herbie Hancock says ‘You have a phenomenal touch, man!’

In addition to his extensive discography and a vast repertoire, Mulligan’s solo work gains praise from critics and audiences alike, and his collaborations include highly acclaimed performances and recordings with Joshua Bell, Lynn Harrell, Leonard Slatkin, and the late Yehudi Menuhin. He has performed all over the world, most notably at Carnegie Hall in New York, the Wigmore Hall and Royal Albert Hall in London, and Suntory Hall in Tokyo. His work can also be heard on the soundtrack for the Steven Spielberg film Band of Brothers and he continues to lead his own Jazz Quartet, which he started when he was thirteen years old.

His eclectic work has led to profiles in Downbeat, JazzTimes, BBC Music, Classic fM, and Gramophone magazines, among others. www.SimonMulligan.com

[vc_row][vc_column][vc_column_text disable_pattern="false" css=".vc_custom_1540853881667{margin-bottom: 0px !important;}"]Founded in 1969 by Arthur Mitchell and Karel Shook, Dance Theatre of Harlem was considered “one of ballet’s most exciting undertakings” (The New...

Motion Theater Lab is a chamber dance company focused on creating works of deep passion and beauty and comprised of seven critically acclaimed performers under the direction of choreographer and dancer Michael Leon Thomas. Mr. Thomas performed principal roles with the...

Climbing PoeTree is the combined force of two boundary-breaking soul-sisters who have sharpened their art as a tool for popular education, community organizing, and personal transformation. With roots in Haiti and Columbia, Alixa and Naima reside in Brooklyn and track...

Invocation for World Peace Michael Fitzpatrick is the recipient of the Prince Charles Award for Outstanding Musicianship bestowed by H.R.H. the Prince of Wales. He has worked musically with His Holiness the XIVth Dalai Lama for the past 14 years on the COMPASSION...

[vc_row][vc_column][vc_column_text disable_pattern="false" css=".vc_custom_1540918974863{margin-bottom: 0px !important;}"]Impact Repertory Theatre was founded in 1997 by Alice Arien, Jamal Joseph, Joyce Joseph and Voza Rivers. Its mission is to use performing arts and...

[vc_row][vc_column][vc_column_text disable_pattern="false" css=".vc_custom_1540918612616{margin-bottom: 0px !important;}"]Founded in 1969 by Arthur Mitchell and Karel Shook, Dance Theatre of Harlem was considered “one of ballet’s most exciting undertakings” (The New...