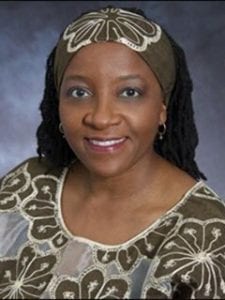 The challenges of growing up black and female in apartheid South Africa have been the foundation of Nontombi Naomi Tutu’s life as an activist for human rights. The third child of Archbishop Desmond and Nomalizo Leah Tutu, Ms. Tutu received her formal education in Swaziland, the US, and England. Today, she divides her life between South Africa and the US.

Her professional experiences include development consulting and coordinating programs on race and gender and gender-based violence in education.  Having also taught at the university level, Ms. Tutu served as Program Coordinator for the historic Race Relations Institute at Fisk University, attending the World Conference Against Racism in Durban as a member of the Institute’s delegation.

In addition to speaking and preaching nationally, she is the founder of Nozizwe Consulting, whose guiding principle is to bring cross-cultural groups together to learn from and celebrate differences and acknowledge their shared humanity.  As part of this work, she has led Truth and Reconciliation Workshops on different types of conflict.  She also conducts educational and partnership trips to South Africa.

Ms. Tutu is pursuing a Master’s in Divinity and is the single mother of two daughters and a son.