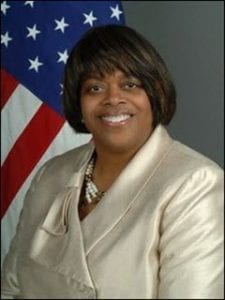 Appointed in 2011 to Ambassador at Large for International Religious Freedom by President Obama, Ambassador Suzan Johnson Cook is the principal adviser to both the President of the United States and Secretary of State and the first African American and the first female to hold this position.

Prior to joining the Department of State, she served as the senior pastor and CEO of the Bronx Christian Fellowship Baptist Church in New York City from 1996-2010.

She has had three Presidential appointments, two Cabinet Secretary Appointments, and a United States Senate Confirmation. Amb. Johnson Cook held the position of Chaplain to the New York City Police Department for twenty-one years, the only woman to serve in that role; she was on the front lines of 9/11. For three decades she served as senior pastor to three New York City congregations, as a professor at New York Theological Seminary from 1988-1996, and as an Associate Dean and Professor at Harvard Divinity School from 1990-1992.