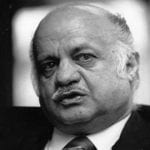 Professor Bushrui is the Baha’i Chair for World Peace at the Center for International Development and Conflict Management at the University of Maryland.  A distinguished author, poet, and critic, he is the foremost authority on the works of Kahlil Gibran.  Professor Bushrui has taught at Oxford, York, and Ibadan Universities, and was the first Arab national to be appointed Chair of English at the American University of Beirut.  He is a founding member of the International Dialogue on Transition to a Global Society.

Professor Suheil Badi Bushrui is a distinguished author, poet, critic, translator, and media personality. Bushrui was the first incumbent of the University of Maryland’s Center for International Development and Conflict Management’s (IDCM) Bahá’ì Chair for World Peace, a position to which he was appointed from 1992 to 2005. He is the founder and current Director of UM’s Kahlil Gibran Research and Studies Project. Well known for his seminal studies in English of the works of W. B. Yeats and for his translations of Yeats’ poetry into Arabic, Bushrui is also the foremost authority on the works of Kahlil Gibran.

Having taught at universities around the world, including Oxford (U.K.), York (Canada), and Ibadan (Nigeria), Profesor Bushrui is a Professor Emeritus and Senior Research Scholar who continues to lecture at the University of Maryland’s CIDCM.

Professor Bushrui’s published work is extensive, in both English and Arabic; his work on Gibran, in particular, has been translated into French, Italian, Spanish and Chinese. His most recent publications include The Ethical Dimensions of Science, Art, Religion, and Politics (1996, co-edited with Miles Bradbury), Spiritual Heritage of the Human Race: An Introduction (2010), as well as an up-to-date biography of Gibran entitled Kahlil Gibran: Man and Poet.