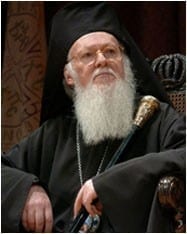 His All Holiness, Bartholomew, Archbishop of Constantinople, New Rome and Ecumenical Patriarch, the “Green Pope,” is the 270th successor of the 2,000 year old Christian Church founded by St. Andrew the Apostle. In this role he transcends every national and ethnic group on a global level and today is the spiritual leader of approximately 250 million faithful world-wide.

Ecumenical Patriarch Bartholomew strives to prepare the Orthodox Church for its continuing role as a mediator between East and West, co-sponsoring, for instance, the Peace and Tolerance Conference in Istanbul (1994) bringing together Christians, Muslims and Jews. He is best known as the “Green Patriarch” for his efforts in organizing since 1995, major international environmental symposia including six Religion, Science and Environmental International Symposia since 1999. These efforts together with his inspiring efforts on behalf of religious freedom and human rights earned him the Congressional Gold Medal by the U.S. Congress. He is being honored for these efforts together with his inspiring commitment on behalf of religious freedom, human rights and interfaith understanding.