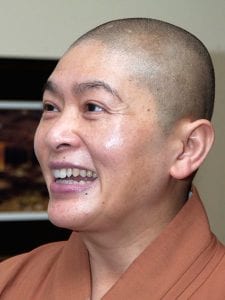 In 2003 in Bangkok Dr. Yifa was awarded the United Nations “Outstanding Women in Buddhism Award.” Since 2002 Dr. Yifa has conducted the Humanistic Monastic Life Programs for teens and college students sponsored by Buddha’s Light International Society. More recently she has directed the Sutra Pagoda Project to research and translate Buddhist scriptures. For many years she has been engaged in interfaith dialogues such as the “Gethsemane Encounter,” “International Buddhist-Christian Theology” and “Religious Ethics” supported by UNESCO. She co-chaired “Nuns in the West,” an interfaith monastic dialogue, and was a contributor to “Safe Motherhood Project” by UNICEF’s South Asia office. She is the author of The Origin of Buddhist Monastic Codes in China, Hawaii University Press (2002) and Safeguarding the Heart: a Buddhist Response to Suffering and September 11, Lantern Books (2002).