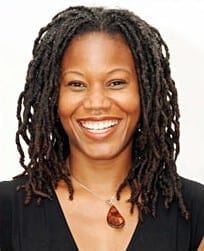 Majora Carter, is the founder and former Executive Director of Sustainable South Bronx (ssbx.org). Her inspiration for  Sustainable South Bronx (SSBX) came after successfully challenging the installation of yet another municipal waste handling plant in her environmentally challenged community.  The mission of SSBX is to alleviate poverty, improve the environment and reduce public health costs.  Among other positive economic developments, she secured a Federal Transportation grant of $20 million for construction (2008) of the South Bronx Greenway connecting 11 miles of bike and pedestrian paths through neighborhoods to the rivers and to each other.  Over the past seven years, she has created a number of riverfront parks and green roofs and successfully implemented the Bronx Environmental Stewardship training program—thus seeding her community with a skilled green-collar workforce. ssbx.org

Ms. Carter’s vision and drive as a dynamic urban revitalization strategist earned her a MacArthur “Genius” Fellowship, a place on the New York Energy and Environment Transition Team, the Clinton Global Initiative’s Poverty Alleviation panel, a NYU’s Martin Luther King Jr. Award for Humanitarian Service and the National Audubon Society’s Rachel Carson Award. Other accomplishments include being named one of Newsweek’s “People to Watch in 2007” and Essence Magazine’s “25 Most Influential African American’s.” Her new PBS program, The Promised Land (http://www.thepromisedland.org/majora-carter), is the winner of the 2010 Peabody Award for best electronic media.